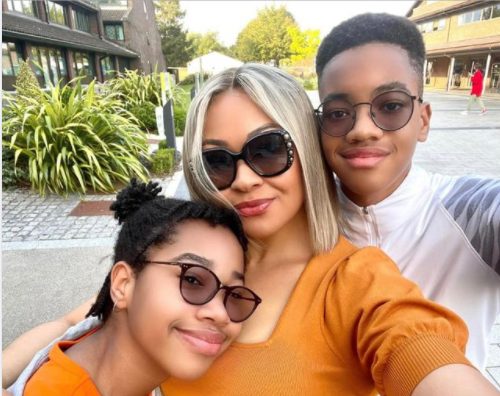 Former Kogi governorship candidate, Natasha Akpoti, has shared a lovely new photo with her beautiful kids on her Facebook page.

This comes after she had a social media fight with alleged social media troll and controversial former presidential aide, Reno Omokri.

READ ALSO: See What Reno Omokiri Has To Say About Salle’s New Looks

Glamsquad Magazine recalls that Akpoti accused Omokri of flirting with her at an event in Aso Rock in 2014 and demanded her phone numbers.

However, Omokri provided documents to prove that he wasn’t in the country as of the time Akpoti said.

Gushing over her kids as she shared a vacation photo, Akpoti wrote, “My jewels, beauty that surrounds my heart”

One of her followers, Abdulrahman Ismaila commented, “Once in a while picture like this includes their father that will earn you a Respect.”

Akpoti replied, “Adulrahman Ismaila Arunge pls share a picture of your mother and father together with you. That will help get some respect to your mother.”

Here Are Some Of The Top Hair Manufacturers In Vietnam

Reno Omokri Attacks El-Rufai over letter to Buhari and APC