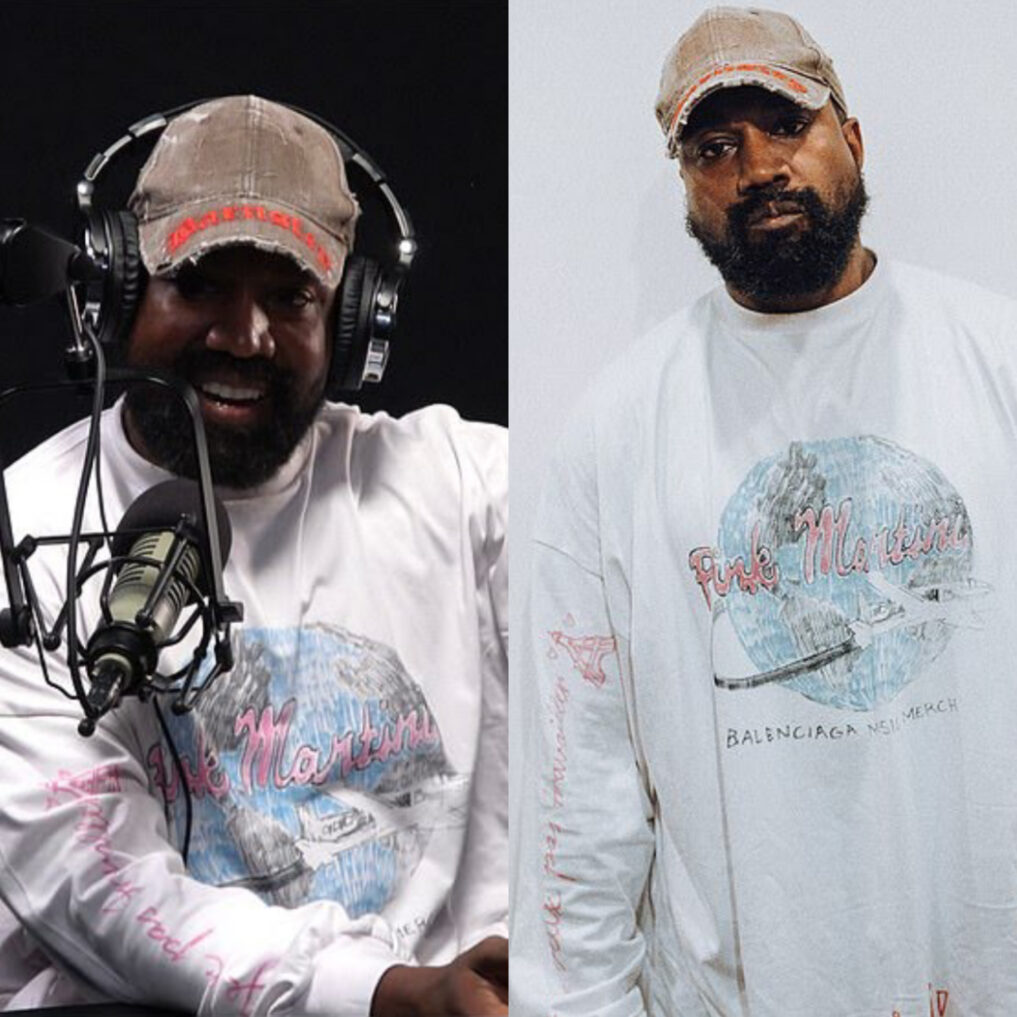 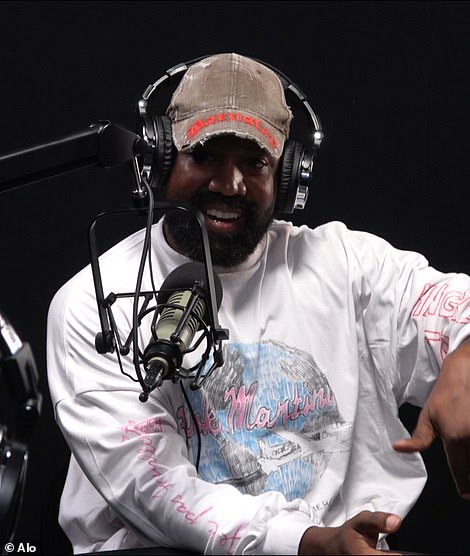 In a bizarre new interview with Alo Yoga’s CEO and co-founder Danny Harris for the sportswear brand’s new podcast, Mind Full, Kanye West, 45, revealed that he has never read a book – and insists that the world needs to ‘outlaw stairs‘ to ‘maximize our existence’ while sharing his Elon Musk-inspired vision for his new $15,000-a-year private Christian school, Donda Academy.

Kanye compared reading to eating ‘Brussels sprouts‘ and said he thinks humans are eventually going to learn to communicate without speaking – like ‘Jedi‘ from Star Wars.

He also hit back at people who have called him ‘crazy,’ claiming that it ‘hurts his feelings’ and insisting that while some critics might not think he’s ‘right’ about some things, he thinks he’s just ‘not right now.’

The fashion designer further claimed that he believes society should cater more to elderly people by eliminating all stairs and replacing them with ramps instead, since ‘we’ll all turn to old-folks’ one day. 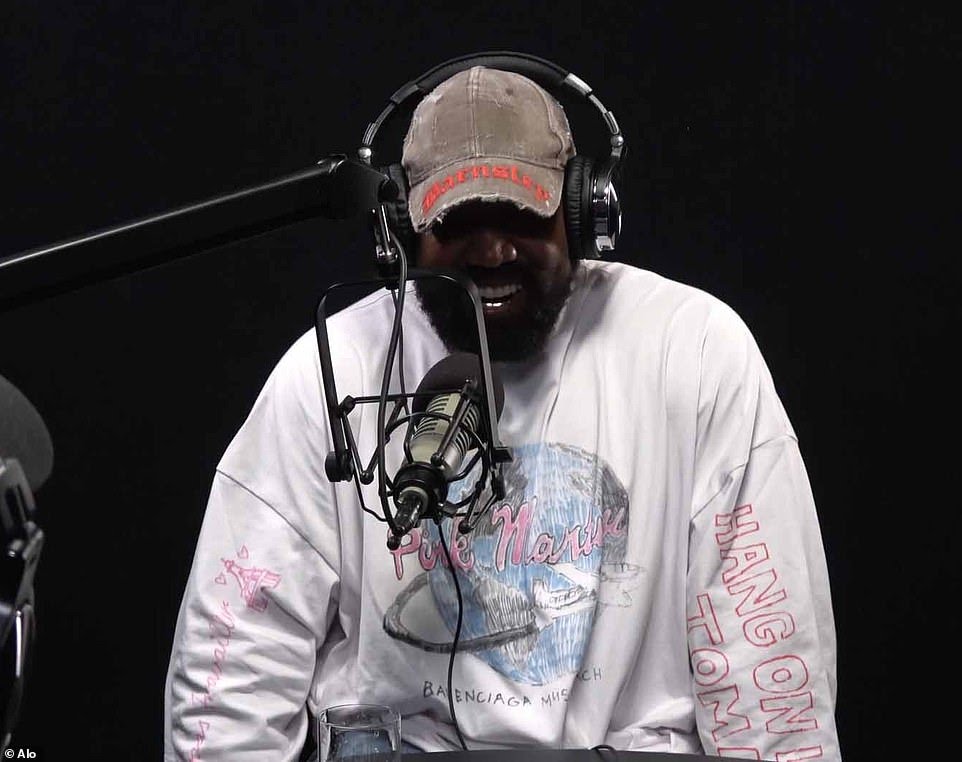 He explained ‘We haven’t designed our world up to this point to maximize our existence on this planet as a species’.

“I’m really big on outlawing stairs. We can have up-ramps but not up-stairs. Everything should be designed like an old-folks home.

“If we’re lucky, we’ll all turn to old-folks. Why, while we’re in the position of power to determine what the world looks like and how it functions, are we all selfishly designing and not considering how it should be in the future?’

Kanye, who split from his wife-of-eight-years, Kim Kardashian, 41, in February 2021, ranted about how people are taught to not be ‘expressive‘ from a young age, and are told to ‘use their words‘ rather than show their emotions.

He also explained that he is now ‘practicing and learning a new style of language,’ in which he doesn’t use words that he feels are ‘classist.’

He said people should talk more like Yoda from Star Wars, and only use words that they ‘absolutely need.’

Kanye shares four kids with the reality star – North, nine, Saint, six, Chicago, four, and Psalm, three; he added that he thinks that his grandkids or great-grandkids will one day get to the ‘level of language‘ where they don’t have to speak at all, but instead, just look at one another, like ‘straight Jedi.’

“We had this one moment earlier, where Danny asked me about the fabrics and I didn’t even have to say a word. We were communicating with a head nod, like straight Jedi.

“That was the one moment that showed where we’ll get to, where our great-grandkids or grandkids will get to.

He professed to spending more time watching Star Wars than he did focusing on school, also revealed that he has never read a book.

“I actually haven’t read any book,’ he stated. ‘Reading is like eating Brussels sprouts for me. And talking is like getting the Giorgio Baldi corn ravioli.”

Kanye made headlines in recent weeks after it was revealed that he had opened his school in Simi Valley, California, which is dedicated to ‘preparing students to become the next generation of leaders, thinkers, and innovators by providing them with a world-class education that includes a rigorous core curriculum, and an emphasis on sustainability, creativity, critical thinking and problem solving,’ according to its website.

Donda enrolment is believed to cost $15,000 per year, but a statement on its website claims that ‘everyone is welcome to apply regardless of financial situation.’

However, a Rolling Stone probe of the school unveiled several abnormalities, including a lack of detail regarding the curriculum compared to similar schools.

Sources also said that families of those enrolled in the school have been mandated to sign nondisclosure agreements.

During the podcast, Kanye defended his Donda Academy, insisting that the institute is helping to grow the confidence of ‘future leaders.’

I have to be able to throw my version onto the curriculum. The standard curriculums that are there, show you how to be in today’s society and all of that, but we have to balance them.

‘We have to allow for self-confidence. So many schools take away from the confidence that these future leaders have for themselves. Those less confident leaders lead on lying as opposed to leading on the truth first.

‘Our school is going to expose the engineering of food, shelter, clothing, automotive, computer, hardware and software, financial literacy, and just as a shoutout to Elon [Musk], rocket science.’

Throughout the 36-minute interview, Kanye also referred to himself as the ‘black Brad Pitt‘ or ‘black Leo,’ and added that he feels he is never wrong, but instead, ahead of his time.

‘It’s not that I’m not right, sometimes I’m just not right now,’ he said. ‘I have to be here because it’s not a good thing to be too ahead because then you lose the audience.’ 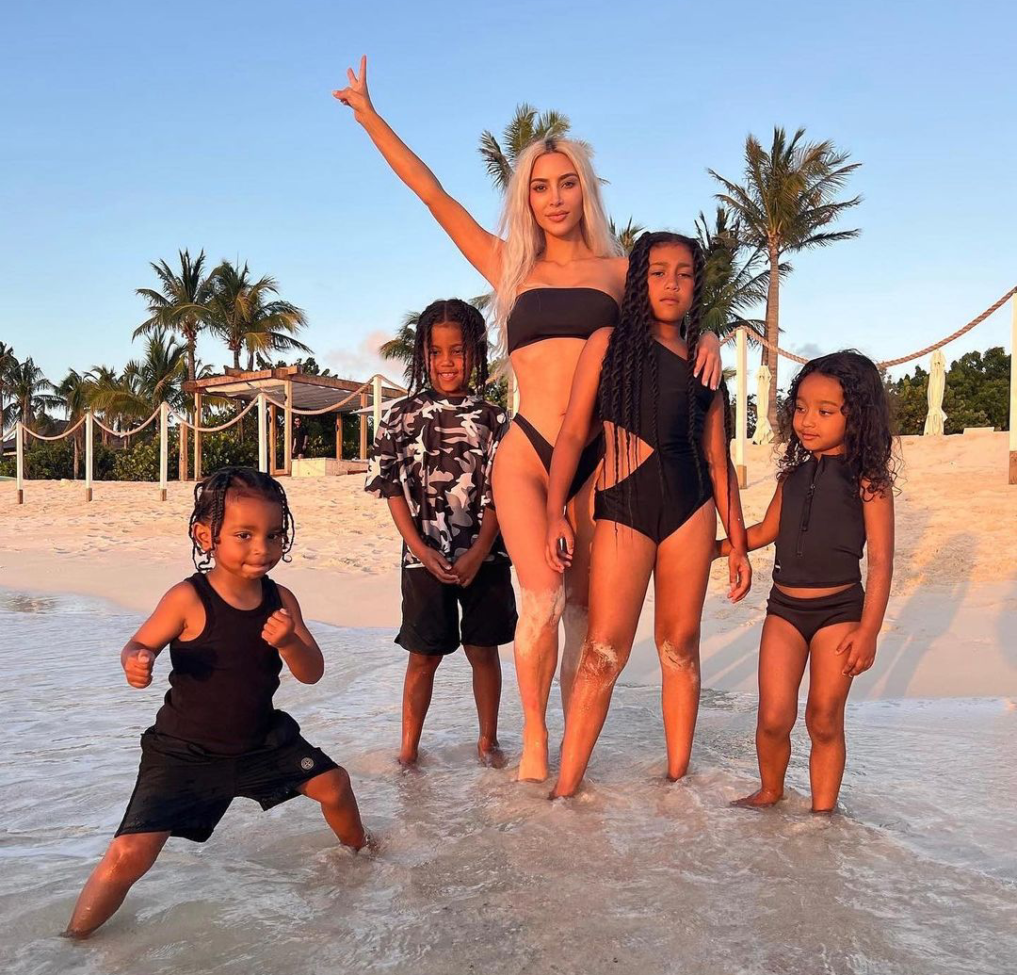 Kanye’s kids attend a posh private school in Los Angeles, but Kanye evidently wanted them to be transferred to his own newly opened Donda Academy.

Read Also: Have You Been Served Breakfast Before? Relationship Coach, Lara Kudayisi Shares Her Story