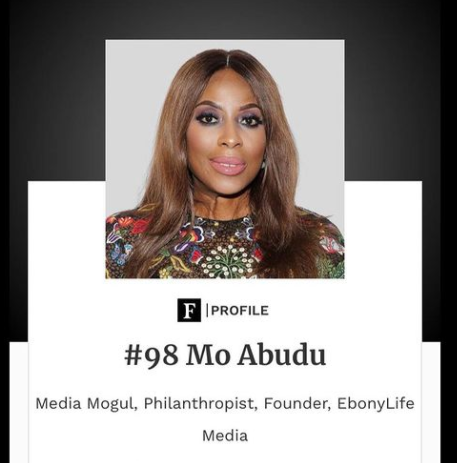 Popular media mogul and Ebonylife Productions boss, Mo Abudu, has been listed as one of the most powerful women in the world by Forbes.

Forbes released its 18th annual list on the 7th of December, 2021 – reported by Nicolette Jones and Erika Burho. Edited by Moira Forbes and Maggie McGrath.

Mo Abudu took to her Instagram page to make the announcement and reveal how grateful she is.

“I’m humbled and deeply grateful to be amongst some of the world’s most amazing women, including MacKenzie Scott (no. 1), a novelist, philanthropist and the third-wealthiest woman in the USA, and Christine Lagarde (no. 3), President of the European Central Bank. Women of colour on the list include US Vice-President Kamala Harris (no. 2,) and Oprah Winfrey, making her umpteenth appearance on this list.” She wrote.

She continued, “There are only three African women on the list: Ngozi Okonjo-Iweala, Director-General of the WTO (no. 91), Samia Suluhu Hassan, the current President of Tanzania (no. 94), And yours truly – Me”

Forbes wrote about her, “Nigerian media mogul Mo Abudu is one of the most powerful women in global media”