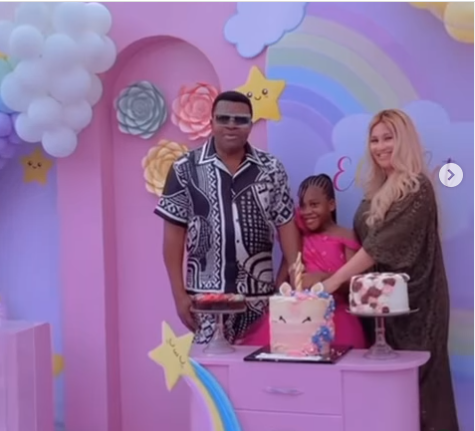 On Sunday, the 35-year-old uploaded a video from the birthday celebration to Instagram.

Caroline Danjuma thanked her ex-husband for his outpouring of support.

“Undisputed best dad in the world awards goes to Elizabeth’s dad, the king himself.. we had a blast yesterday,” the actress bragged.

Caroline also shared a video of her and her ex-husband dancing.

In 2016, allegations of infidelity caused the mother of three to end her ten-year marriage to Gen. TY Danjuma, the younger brother of Nigeria’s former defence minister.

The actress, formerly known as Caroline Ekanem, made her Nollywood debut in the 2004 film Deadly Kiss, directed by the late Chico Ejiro.

In a related development, Paul Okoye, a Nigerian singer, and his estranged wife Anita came together for the first time to see their children.

After a screenshot of the court case the singer’s wife filed against him surfaced online, the couples are about to file for divorce from one another.

She also revealed chats between Paul and his alleged lovers, stating that the singer had an affair with their housemaid, Florence.

Since Anita Okoye filed for divorce, she has been living in Atlanta, Georgia, US, with their three kids while Paul lives in Nigeria but visits his kids when he can.

0
Ifeanyichukwu Ngere September 18, 2022
No Comments Yet

CAROLINE DANJUMA SHOWS US HER CREATIVITY IN MAKE-UP ARTISTRY