Barely a week after premiering ‘Essence’ remix featuring Canadian singer Justin Bieber, Nigerian superstar Wizkid has unveiled the official tracklist for the deluxe edition of his successful album, ‘Made In Lagos’.

‘Made In Lagos’, released on October 30, 2020, is the fourth studio album from Wizkid. The afrobeats star is about to make the body of work even bigger with the release of the deluxe edition, which would drop on August 27, 2021.

The ‘Daddy Yo’ crooner shared the track-list of ‘Made In Lagos’ deluxe edition on his Instagram stories on Monday night. Wizkid gave his fans worldwide a sneak peek at the fresh additions to expect from the soon-to-be-released compilation.

The deluxe edition of ‘Made In Lagos’ contains already released tracks with new songs, including the Justin Bieber-featured ‘Essence’ remix. The forthcoming album enjoys collaborations from burgeoning talents, Terri and Buju.

See the tracklist below; 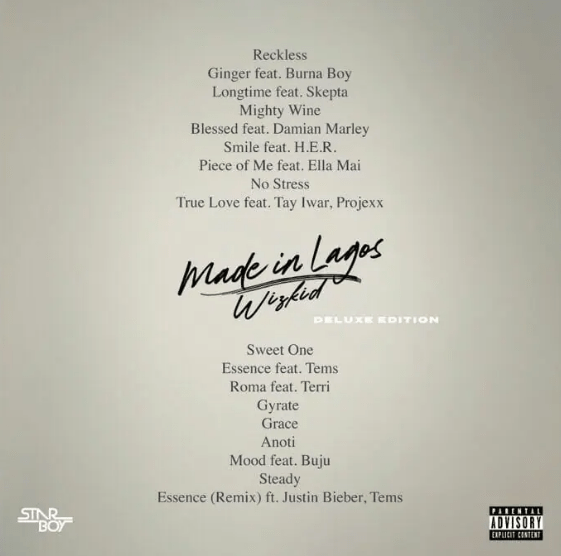 Wizkid beats other Nigerian celebrities as he makes groundbreaking achievement