Nigerian singer and record label boss, David Adeleke popularly known as Davido has taken to his social media space to share a throwback photo of his dad and late mum together.

The 28 year-old father of three on Monday evening shared a never seen before photo of his parents on his Instastories. According to him, the photo was taken in the 90s in the US. 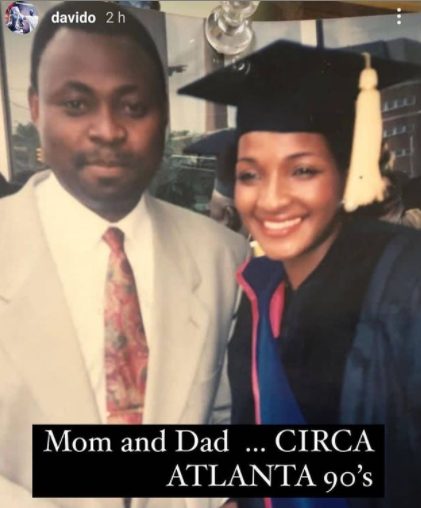 In other gist, Actress Uche Ogbodo has revealed that getting pregnant has messed up her life in a rather beautiful way.

“Me and my Baby Bump that has Messed Up My life beautifully.”

Uche recently announced her pregnancy after previously denying the claims from a blogger.

The 34-year-old actress who has a daughter from a previous relationship says she is happy having as many children as possible as a single mother.

Shade took to her social media page, where she revealed that she does not think she wants to have children.

Speaking further, she disclosed that she is good with them and that she loves kids dearly but she does think there is absolutely no need for her body to go through that sort of “mess”.

Actress, Uche Ogbodo Says Pregnancy Has Messed Up Her Life