Award-winning Nigerian rapper, singer and activist, Folarin Falana professionally known as Falz has tackled President Muhammadu Buhari over his controversial tweet to treat those who are too young to understand what occurred during the civil war in a “language they will understand”.

The vocal entertainer has been a strong voice in Twitter NG, took to the micro-blogging platform on Tuesday, June 1, to challenge Buhari to solve security issues such as kidnapping and banditry.

Recall that the President had triggered an outcry after he tweeted;

“Many of those misbehaving today are too young to be aware of the destruction and loss of lives that occurred during the Nigerian Civil War. Those of us in the fields for 30 months, who went through the war, will treat them in the language they understand.”

Reacting to this, Falz asked if he has treated Boko Haram with the “language they understand”.

The rapper who further stated that Buhari tweeted “rubbish”, also asked the treatment given to kidnappers and bandits by the President he said “goes to London today and Paris tomorrow”.

What is this? Have you treated Boko Haram with the “language they understand”? What about the kidnappers & bandits ? Today you go London, tomorrow Paris. You are now coming here to tweet rubbish 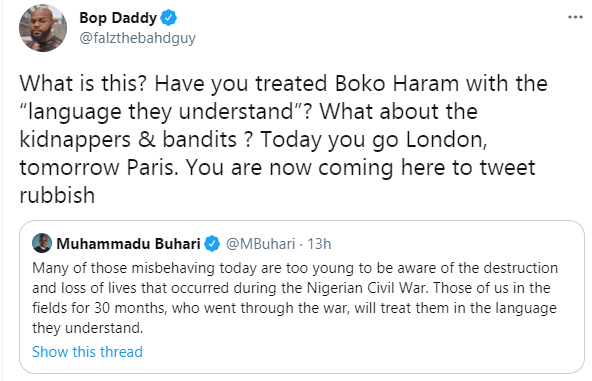 0
Ifeanyichukwu Ngere June 2, 2021
No Comments Yet