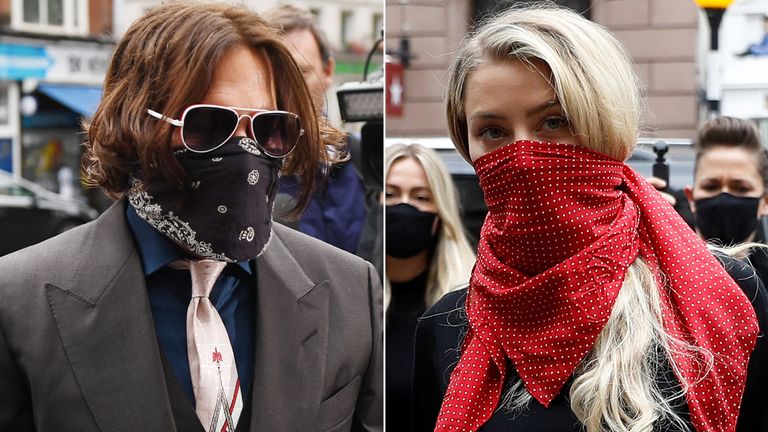 The actor’s version of events in his marriage, as he seeks libel damages from the Sun

In his witness statements, Johnny Depp addressed claims and counter-claims of violence arising from his relationship with Amber Heard. Here are some of the main incidents:

It was alleged that Depp hit Heard so hard that “blood from her lip ended on the wall,” in a row over a painting by one of her ex-partners that was hanging in her bedroom and to which he tried to set fire. He claimed: “I never hit Amber or tried to set fire to the painting.” He said the painting “was right in my eyeline as soon as I woke up” and that “I told her nicely that I would prefer not to wake up to art by her ex-wife”.

Depp said: “She claims that I held one of our dogs, Boo, out of the window of a moving car while I howled like a dog.” He denied it as “an absurd, invented scenario,” claiming that among reasons it would not have happened was that “the windows of the car that I drive in LA are tinted, and I generally do not open them except to smoke, and then I will only crack the window”.

It was claimed that Depp grabbed the wrist of a young woman and threatened to hurt her, at a gathering of Heard’s friends. Depp said Heard and her friends were high on mushrooms and MDMA, one woman was “running her hands all over Amber’s body very sexually” and Heard did not object. He said he had also “taken a few mushrooms and was drinking alcohol” and he recalled telling the woman: “If you can’t handle the drugs, don’t take them.” He claimed he did not hurt or threaten her, or “throw glasses at Amber or rip her dress”. He said he did “hit a wall sconce with my hand”.

Private plane flying from Boston to LA, May 2014

It was alleged that after drinking heavily, Depp threw objects at Heard on the flight, pushed a chair at her, taunted her and kicked her in the back, causing her to fall over, threw a boot at her while she was on the ground, and screamed obscenities. Calling it a “pathological lie”, he said he had been drawing art sketches on the plane, and he denied hitting Heard, but he said he “stretched my leg out to tap her playfully on the bottom”. He said: “It is true that rage-filled violent incidents on planes were common with Amber,” but he said she was always the “sole aggressor”. In another incident, he claimed, he locked himself in the plane bathroom after Heard became verbally aggressive and called him “a pussy” and “spineless” for running away from fights with her.

When filming Pirates of the Caribbean, it was claimed, Depp exploded when Heard found a bag of MDMA pills and, when confronted, he swallowed some pills and “chased them down with liquor”. Heard, describing a “three-day hostage situation”, said she barricaded herself in a room. It was claimed that over three days Depp broke through the door, pushed her to the ground, choked her and spat in her face, shoved her into a ping-pong table, threw bottles through a glass door, tore off her nightdress, and grabbed her by the hair and choked her against a kitchen fridge.

Denying violence or taking MDMA, Depp said the house had seven bathrooms, and at various points he had hidden in all of them to avoid Heard. He claimed she had learned of his intention for a post-nuptial agreement, cutting her out of his will. She threw two vodka bottles at him, the second of which severed the tip of his finger when it exploded on a marble bartop, he said. She also put out a lit cigarette on his cheek, he claimed. He said he broke his sobriety and was in shock, and sought refuge and peace “in one locked bathroom after another”. It was an “absurd” suggestion that “I had severed my own finger by smashing a plastic telephone against a wall,” he said.

“As to other ‘details’ she has now added – I did not urinate throughout the house, I did not paint Amber’s clothes, nor did I hide raw meat around the house,” his statement said.

It was alleged that Johnny Depp arrived late, drunk and high on drugs. After guests left, during an argument, he threw a magnum-sized bottle of champagne at Heard, which missed and hit a wall, threw a glass of wine over her head and left a note which said “Happy fucking birthday”, it was claimed. Depp stated he was not intoxicated or violent but was in a state of shock after learning earlier about the state of his business affairs, and he said: “After the party was over, I went to bed and began reading in the penthouse.” He did not recall leaving such a note, but he said it was possible “after the abuse I had suffered that evening”. It was the “final straw” and he had decided to leave Heard, he said.

On learning that Heard was accusing him of domestic violence

In a text to Heard’s father, Johnny Depp wrote: “I worshipped her and have been betrayed by the very love of my life….fuck it… she killed it.” He added: “I ain’t no scumbag!!! dude, my fucking wedding ring is still on me!! I have not taken it off because I love her… it’s coming off now. What a fucking knife in the back. I’m so disappointed and so hurt…It’s just too much…x…later, brother…feel better!!! jd.”

Busola Dakola & Her Kids are Royalty in New Photos

Jubilation as MC Oluomo's kids graduate from US high schools