“I’ve always wanted to get in touch with my roots and connect to the motherland. You know, Africa is blessed with so much talent and I felt like it was time to tap into that resource. The Ascension is not just talking or focusing on Africa but it’s also about me giving back to the people, familiarizing with the culture and connecting more with the motherland.”

The rap mogul follows in the footsteps of his wife Beyonce whose last album “Lion King: The Gift” album, featured African stars like of Burna boy, Wizkid, Tiwa Savage, Shatta Wale, and Tekno.

Take a look at the track lists below: 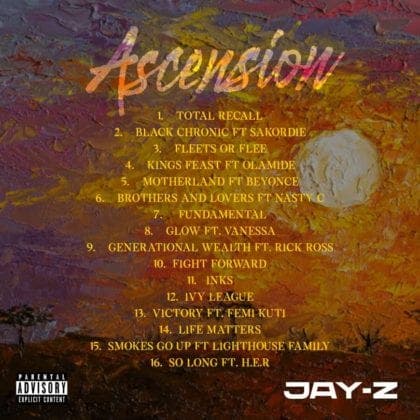 The ‘Champion’ crooner took to his Twitter page to state that the popular indigenous rapper’s alter ego is his inspiration forever.

0
Ifeanyichukwu Ngere April 1, 2021
No Comments Yet

Reactions as Olamide shares first post, photos of the year

Video: Shyness and confidence stopped me – Maria Okan shows off bikini body for the first time