Best known for playing Will Ferrell’s son in “Talladega Nights,” former child star, Houston Tumlin has killed himself at the age of 28.

This was confirmed by the Shelby County Coroner’s Office on Wednesday, March 24.

Tumlin died from a self-inflicted gunshot wound at his Pelham, Alabama home on Tuesday, March 23.

In his only role as an actor, Tumlin played Walker Bobby, the 10-year-old son of Ricky Bobby, played by Ferrell in “Talladega Nights: The Ballad of Ricky Bobby.”

According to AL.com, Tumlin was born in Pell City, Alabama, on December 27, 1992, and graduated from Victory Christian High School in 2011. He served in the U.S. Army’s 101st Airborne Division and was promoted to sergeant in 2017.

Tumlin’s girlfriend, Charity Robertson, confirmed his death in a Facebook post, writing: “I’ve never experienced a hurt like this before. I feel numb, I feel defeated, I feel lost. I feel empty. My heart is absolutely shattered.”

“My sweet, sweet baby.. Our time together was one of the best experiences of my life. I’ll miss your big heart, caring spirit, infectious laughter, & oh man could the list go on. I love your smart mouth, your “I’m always right” attitude, your hugs, your kisses, your touch.. Just YOU!

I just still feel like this is a really bad dream that I can’t wake up from.”

“One thing is for sure though, I have the absolute best guardian angel a girl could ever wish for cause everybody knows you don’t play about me.”

“I love you so much Houston Lee & thank you for loving me so passionately and unapologetically for the time we had each other.” 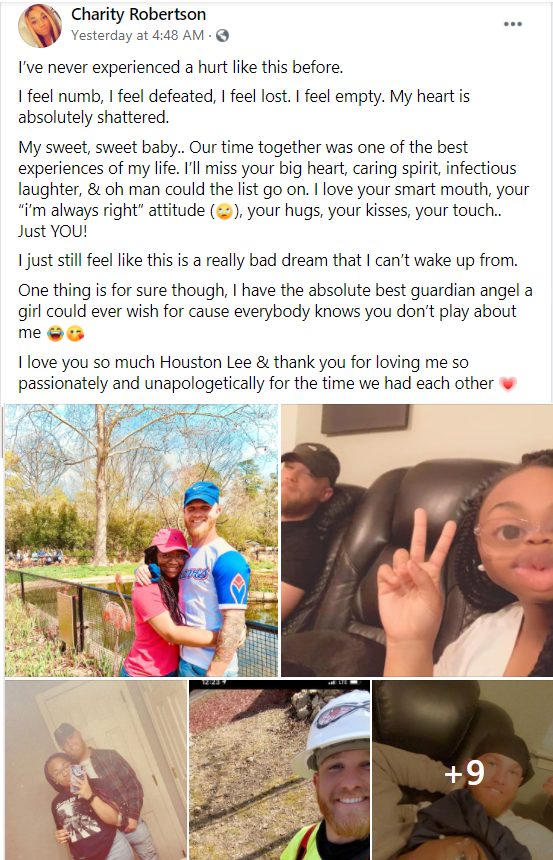 Moses Tembe pays touching tribute to daughter, says she did not commit suicide

‘I Tried To Kill Myself Twice’ – Tiwa Savage Reveals