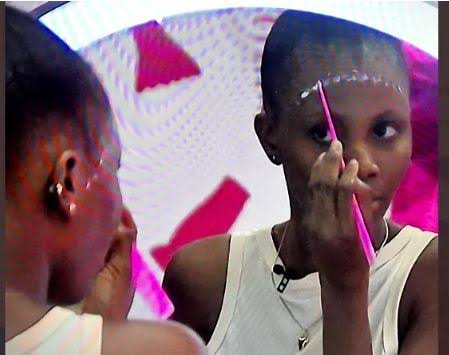 Glamsquad reports that two weekends ago, a 24-year-old model, content creator, and make-up artist was introduced as a new housemate.

Modella, a fake housemate on the ongoing Big Brother Naija reality show, has undoubtedly become the talk of the town due to her glued frontal wigs hairstyle.

Fans have continued to express their displeasure with her unusual hairstyle, despite the fact that she has a beautiful body and a lovely face.

Two weekends ago, the 24-year-old model, content creator, and make-up artist was introduced as a new housemate.

The issue with her frontal wig styling is that they begin at the front of her head, close to her eyes, and do not appear light and feathery.

For a better understanding, a frontal is a hairpiece with a strip of material running from ear to ear. It usually stretches 13 inches and extends about 5 inches back, forming a half-wig. It is usually sewn onto bundles, but it can also be used to make a full wig.

There’s nothing wrong with wearing a regular wig without a frontal closure, and we’re sure it’s not good for her edges if she keeps adding so much glue to it.

Fans are reacting because the frontal wigs don’t look good on her small, oval-shaped head, and they find it very funny.