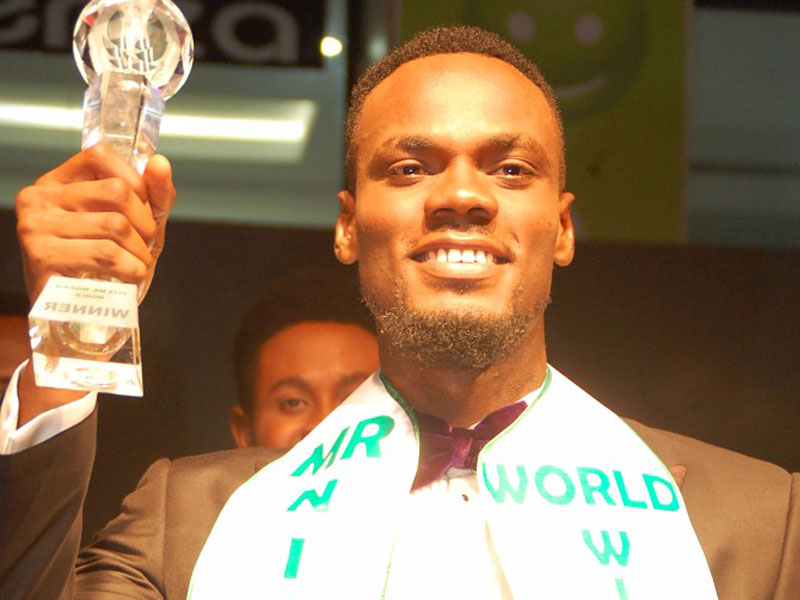 Nelson Enwerem, the current Mr Nigeria, representing the country at the ongoing Mr World in the Philippines, says he will not disappoint his nation with support from citizens.

Enwerem told the News Agency of Nigeria (NAN) in a message from Philippines that in spite of the injury on his knees, he would fight through to the final.

NAN reports that Enwerem, a 24-year-old graduate of Pure Physics, hurt his knee during the sports challenge category which led to his being eliminated from the category.

He described the elimination due to the injury as his major challenge.
“My major problem since I came here was hurting my knee and dropping out during the first challenge (sports challenge) but I’ve been persistent.

“I’ve been fighting though with the pain and limping to compete because I can’t fail my country,” he said.

According to Enwerem who is also a fashion designer, there hasn’t been any elimination so far but we’ve had different category competitions to select winners and am very positive on winning one of them.

He said that the organisers had started announcing winners of various challenges of which he is positive of bagging one of the categories.

“The sports challenge was won by Mr South Africa, Extreme challenge by Mr Ireland, while the other winners will be announced before the grand finale on Friday.

“I’m very positive of wining one of them,” he said.

Enwerem, also a model and actor, appealed to Nigerians to support him by going to his site to vote for him and like his posts on social media.

He added that the more votes from Nigerians would boost his morale and also increase his chances of winning.

“I seriously need the support of my country, it’s a big morale booster to know that the people you represent support you and care for your well being; I need them to vote for me.

“Thank you very much, NAN, I have seen your stories, I am extremely grateful but it hurts that all these are going on and almost no blog is talking about it,” he said.

“The competition has been going on well and I’m very glad I have this once in a lifetime experience,” he told NAN.

NAN reports that Enwerem is one of the 13 young men representing Africa at the ongoing Mr World competition in the Philippines.

The current champion, Rohit Khanddelwal from India, is expected to hand over the crown to his successor at the end of the event.

Baba Ijesha has been granted bail