Big Brother Naija’s Queen Mercy Atang, one of her ex-housemates, backed a tweet in which her co-reality star, Maria Benjamin Chike, was being trolled.

Since Maria uploaded a post on her Instagram profile on Sunday, several social media users have reacted and criticized her.

Maria was teased and trolled by one blogger for not receiving much engagement in a post that was supposed to have received a lot of likes for her.

When the blogger saw the post, it had only about 80k likes, but by Monday morning, it had risen to roughly 90k.

The Reality star was cautioned to keep in mind, in a post posted by the blogger, that publishing unclad images of herself will not gain her the engagement she seeks.

“I am back oo, I just want to let you all know that the internet is silent, the nude pictures did not shake the internet.

“This is the first time I am seeing such picture struggling with likes. Not up to 90k likes since morning.

“Hanty, nkednes is not your calling, try and remove you pata/drus next time, perhaps that one might do the magic.

“For now, internet no shake, they no even notice you. Next time try and put on a bikini pant at least who wears their normal pant to the beach?? Only Nkechi ”

Meanwhile, while scrolling through the message, we noticed that Queen endorsed it by liking it. Recently, the Queen and Maria have been entangled in a web of controversy, implying that they are not on good terms. 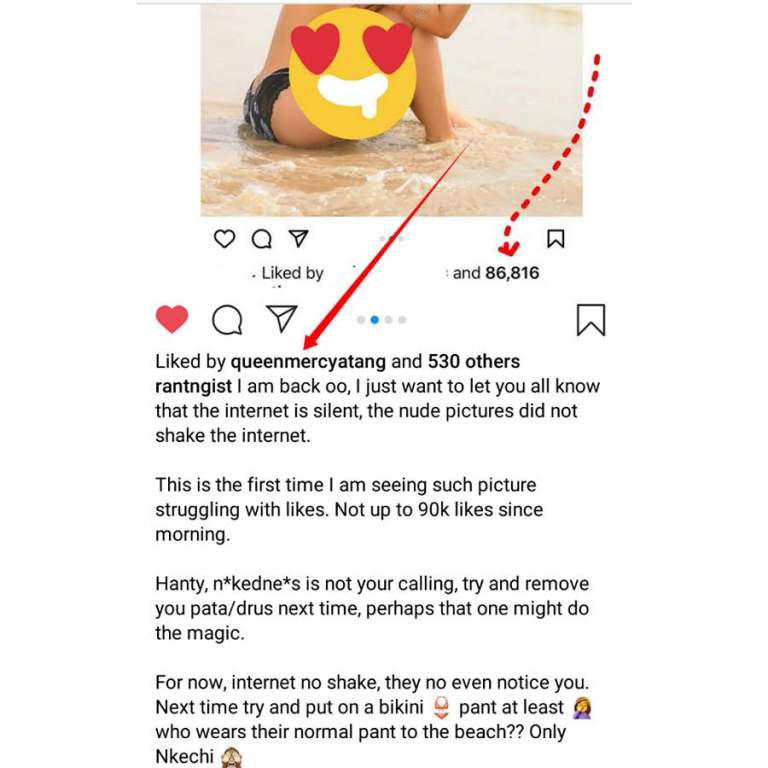