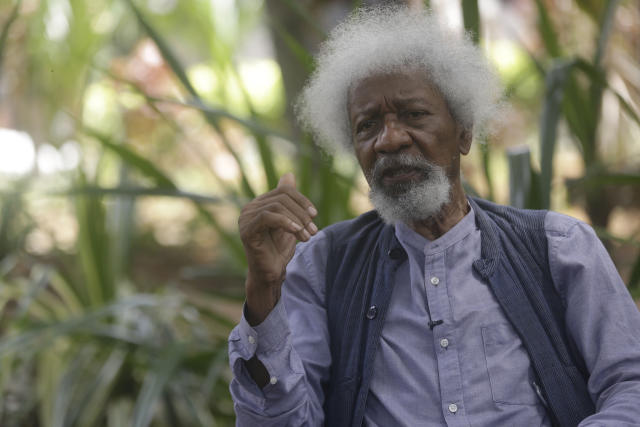 Nobel Laureate Wole Soyinka remains optimistic that, Nigeria’s youth have the enthusiasm and know-how to set the country back on track.

The 87 old believes that, Nigeria’s youth have the enthusiasm and know-how to set the country back on track.

According to Soyinka, the younger generation must “decide whether they want to keep continuing down the same chugging one-track train” or design a new direction.

Soyinka credits young Nigerians — roughly 64 million of the country’s more than 200 million individuals aged 15 to 35 — with attempting to radically reform the country. He uses the #EndSARS protests in October 2020 as an example.

Nigeria was under military administration for about 30 years throughout that time.

Despite the fact that the protests a year ago resulted in gunfire and the deaths of over 30 protestors, Soyinka believes that the widespread demonstrations coordinated on social media demonstrate the youth’s ability to effect change.

“For example, the kind of enthusiasm and intelligence that launched the #EndSARS movement may be employed on a far larger scale to involve masses of people,” he stated.

Soyinka has constructed a fictional Nigeria plagued with crime, corruption, and anarchy, with an oppressive ruling party dubbed “Chronicles from the Land of the Happiest People on Earth,” which was published in September.

The satirical novel features a human body parts trade run by a firm called Human Resources, as well as a megachurch pastor preaching Chrislam (a hybrid of Christianity and Islam).

However, Soyinka’s unflinching portrayal of Nigeria is tinged with optimism.

Soyinka spoke to AP from Lagos’ Freedom Park about his thoughts on his homeland. Soyinka believes the contemporary Nigerian system is not a “functioning, productive” one, similar to the setting of his novel.

Soyinka endorsed presidential candidate Muhammadu Buhari in 2015, pleading with Nigerians to forgive him for his time as a dictator who ruled the country from 1983 to 1985.

Now that Buhari is president, Soyinka is a vocal opponent.

He claimed Buhari has a history of “placing people in boxes” when they disagree with him, citing separatist leaders Sunday Igboho and Nnamdi Kanu, who are now in Nigeria’s secret police custody.

Nigeria, according to Soyinka, began to head in the wrong way in 1955, when the West African giant began to receive “unearned and unjust wealth” from oil.

“We didn’t make anything from the oil; we just utilized it raw for what it is, sold it, took the money, and wasted the money,” said Soyinka, who won the Nobel Prize for Literature in 1986 as the first Black novelist and the first African.

“Productivity fell, and the small economies that sustain a people began to vanish,” he said.

Despite the fact that Nigeria has become one of Africa’s greatest economies as a result of crude oil exports, its people continue to suffer from poverty and underdevelopment.

Nigeria suffered its first military coup in 1966, ten years after it discovered large quantities of oil, opening the floodgates for a sequence of dictatorships that inhabited Nigeria for nearly all of the years until 1999, when democracy was restored.

Soyinka, a thorn in the flesh of military leaders of state, went into self-imposed exile after organizing pro-democracy protests against one of those military regimes — the late Sani Abacha’s — in 1994.

Nigeria has been democratic for more than 22 years, but Soyinka says the country has “never fully recovered” from its totalitarian years.

Furthermore, he believes that many of the changes for which he pushed have yet to materialize.

“What we’ve experienced here is a re-invention of the wheel,” says the author “he stated “‘Oh sure, I am listening to people,’ each dictator claims. They also wish to change. So let’s get together and tinker with the constitution.’

In the northeast, a 12-year war against the Islamic extremists of Boko Haram and their offshoot, the Islamic State West Africa Province, continues to hold the region hostage; in the northwest and central states, banditry that has resulted in the deaths of thousands and the kidnapping of many, including schoolchildren, rages on; and in the south, a violent separatist movement is emerging.

READ ALSO: Prof. Wole Soyinka at 86! Check Out His Live in Pictures

Things may have turned out differently if leaders hadn’t “pretended that what was happening was merely a blip on the screen, although it was extremely deep inside the community,” according to Soyinka.

“They declined to act at the appropriate time. They made a deal. They made amends. They made an exception. They tormented each other.

And in the process, we completely lost our humanity,” he lamented, his countenance sad.

“As a result, whenever we point a finger at the government, those in power look at us and view themselves as a reflection of the rest of society.” The kettle is calling the pot black. ‘Come and chop tiny,’ they say. ‘We have a lot in common.’

And, of course, we join in the chopping. That is precisely what has occurred to us as a people… “Everything has lost its worth.”

Nigeria, according to Soyinka, must undertake a “brutal” and “marathon” soul-searching process in which “we call ourselves names and tell ourselves the truth without any compromise” in order to revers the trend.

The country requires a leader who will “grab the bull by the horns” and lead by example.

He believes the country requires a leader who will “take the bull by the horns” and admit that “so far, so awful.”

Soyinka is touring the world to promote his book, and he maintains a continual stream of criticism, frequently criticizing successive governments’ leaders. He does confess, though, that he is not as powerful as he once believed.

With a chuckle, he said, “I’m terribly exhausted.” “I just try to live as normal a life as possible.” There was no particular recipe or anything like that. Take each day as it comes.”

He’s also sick of reading his own funeral announcements. Fake news reports regarding Soyinka’s death are common on social media in Nigeria, with the most recent one appearing in mid-October. He asserted that he has read the news of his death more than his own efforts.

“I’m tired of dying,” he replied, flinging his two hands in the air as if surrendering to death. “It’s not inventive in the least.” Every time I read my obituary, I get bored. It’s been going on for a long time.”

2 Most Beautiful Churches In Nigeria

Independence Day Special: 6 Amazing Facts About Nigeria You Should Know