In TIME Magazine’s new edition dares Donald Trump in a statement with their new issue which has President Donald Trump towering over a crying child. The cover is a response to Trump administration’s order that separated families crossing the US-Mexico border.

The photo of the crying girl was shot by John Moore, a Pulitzer Prize-winning photographer for Getty Images, who has been photographing immigrants crossing the U.S.-Mexico border for years.

On the photo of the girl, he says “This one was tough for me. As soon as it was over, they were put into a van. I had to stop and take deep breaths. All I wanted to do was pick her up. But I couldn’t.” 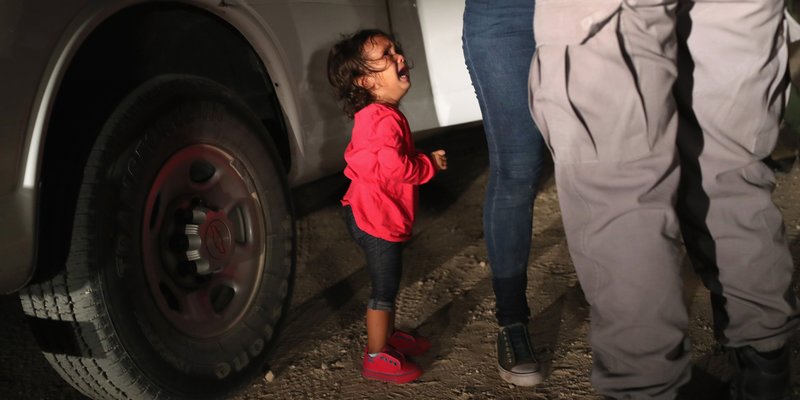 MCALLEN, TX – JUNE 12: A two-year-old Honduran asylum seeker cries as her mother is searched and detained near the U.S.-Mexico border on June 12, 2018 in McAllen, Texas. The asylum seekers had rafted across the Rio Grande from Mexico and were detained by U.S. Border Patrol agents before being sent to a processing center for possible separation. Customs and Border Protection (CBP) is executing the Trump administration’s “zero tolerance” policy towards undocumented immigrants. U.S. Attorney General Jeff Sessions also said that domestic and gang violence in immigrants’ country of origin would no longer qualify them for political asylum status. (Photo by John Moore/Getty Images)

Making a bold statement, TIME’s editors selected John Moore’s photograph to create a photo illustration, including Trump, to make the July 2, 2018, cover of the magazine.

TIME Magazine: Davido One Of The Most Influential People In The World