Following the physical confrontation between two Nollywood stars, Jim Iyke, who doubles as an actor and an entrepreneur,  and Uche Maduagwu, who is also a celebrity troll, the latter has ended up in ‘sickbay’.

According to unconfirmed reports, Uche Maduagwu has ended up in an unknown hospital after Jim Iyke pounced on him on Tuesday and subjected him to beatings.

Iyke assaulted Maduagwu for questioning his source of wealth in a viral video that sort to smear his brand and bred speculations of involvement in illicit activities to earn money.

Maduagwu argued that while he makes “clean money” and dresses in expresses clothes he’s not celebrated for his fashion sense but, Jim Iyke is always stealing the spotlight for his lavish lifestyle despite the source of his health being unknown.

“Look at the expensive lifestyle e dey live up and down in Lagos and Abuja. Someone told me e no dey buy expensive clothes from Naija again, e now import the most expensive ones abroad. Please, what is his source of wealth again?” he wrote in Pidgin English. 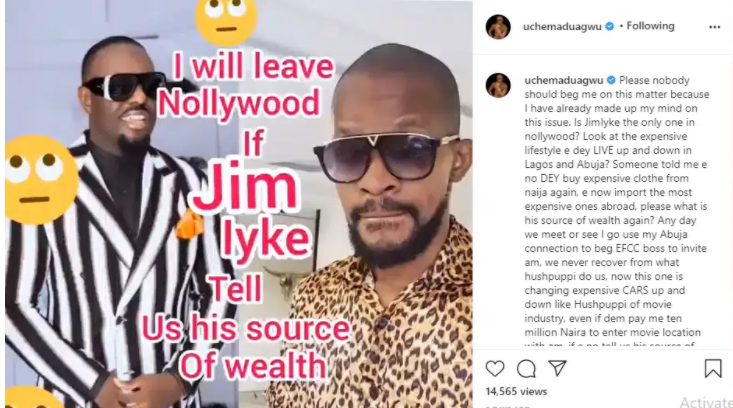 The above remarks appeared not to have gone down well with Jim Iyke who stormed Uche Maduagwu’s production studio to confront him.

In a video that has gone viral, a furious Jim Iyke was seen kicking the actor until he was held back by his friends.

Maduagwu threatened to sue Iyke for assault but the latter seemed ready for any legal action from his colleague.

He vowed to face him squarely wherever their paths cross.

Photoshoot Gone Wrong: Model Mauled By Leopard After Getting Into Its Cage