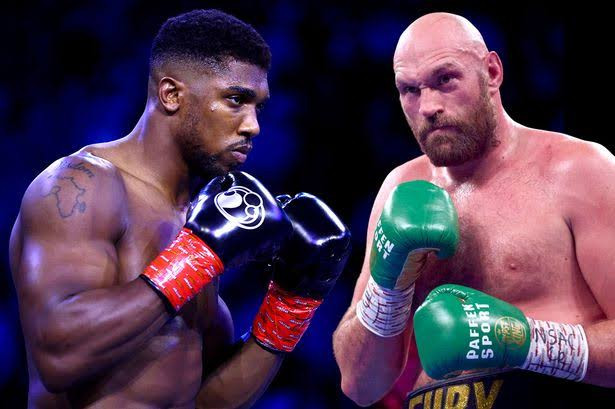 WBC heavyweight champion Tyson Fury has run out of patience after he issued Anthony Joshua an ultimatum to sign the contract for their all-British heavyweight battle or else it would be called off.

Fury, 34, gave Joshua, 32, the opportunity to fight him in December 2022 with the possibility of winning championship belts, despite Joshua losing recently to Oleksandr Usyk.

In the contract offer, Fury gave Joshua a 60-40% income share in Fury’s favour, a generous offer given that Joshua is fighting without any belts.

Meanwhile, the talks between the rival promoters are believed to have gone well so far but Fury says time is of the essence if a major fight is to take place by early December.

“We’ll know by Monday anyway [if the super-fight is on] because if it’s not done by Monday I’m moving on.

“I was optimistic about three weeks ago but it shouldn’t be taking this long to sign a contract.

“I’m not waiting around for some guy who’s lost three of his last five fights. He’s lucky that I’m giving him a world title shot. If not he’ll have to wait a long time to get another one”.

However, Joshua took to social media to say,

“It’s not in my hands, it’s with the legal team. That’s why you hire lawyers. You know the history of boxing, make sure you get your legal terms right.

“Of course, I’m going to sign a contract. It’s just with some lawyers at the minute.”

Fury will fight before the end of the year, however, the undisputed showdown with WBO, WBA and IBF titlist Oleksandr Usyk will have to wait until next year. He said,

“We offered him [Usyk] the December 17 date in Saudi Arabia for the undisputed heavyweight championship of the world.

“Everybody wanted that day and Usyk said he was injured and he couldn’t do it till next year. And now he’s saying I’m scared of him!”

“I’ll put this fist right through his face.”

Fury who is confident concluded that,

“I’m trying to get an opponent for December 3 and if AJ fights then I’ll eat hay with the donkeys and if he doesn’t then I’ll fight somebody else.

“They’re all running scared. I’ll fight anybody, any time, any place.”