Twitter has been running a pilot program called Birdwatch since the beginning of the year, in which it crowdsources fact checks directly from other Twitter users. 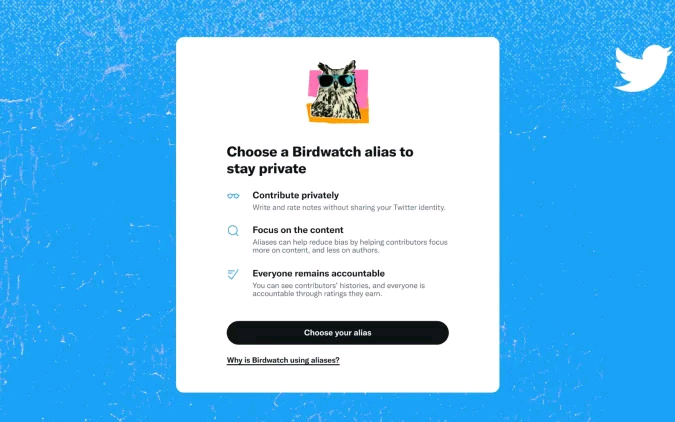 It’s now adding a feature that allows program participants to hide their identity when they add a note to someone’s tweet. Starting today, the company says it will automatically generate aliases for new Birdwatch users who do not have public Twitter accounts.

🐦Introducing Birdwatch aliases!🔍 We want everyone to feel comfortable contributing to Birdwatch, and aliases let you write and rate notes without sharing your Twitter username. pic.twitter.com/ROlbpYvT7u

“We want everyone to feel comfortable contributing to Birdwatch, and aliases allow you to write and rate notes without revealing your Twitter username,” the company wrote in a blog post. It hopes that by emphasizing what people write in notes they leave instead of their identity, the feature will reduce bias.

According to recent research, aliases may also make people feel more comfortable “crossing partisan lines or criticizing their own side without fear of peer pressure or retaliation.”
Along with aliases, Twitter is introducing profile pages that will make it simple to view someone’s previous Birdwatch contributions.

According to the company, this is done to ensure that aliases are not used “at the expense of accountability.” To that end, each note on someone’s public profile will include the contribution’s current rating, letting you know what the community thinks of it. Hopefully, this will help with the program’s long-standing reliability issue.

Those who joined Birdwatch prior to today’s announcement will see all of their previous contributions redirected to their new alias. Because some people may be able to infer a link between someone’s Birdwatch profile and Twitter username based on fact checks seen prior to today’s feature rollout, the company says program participants can DM the Birdwatch account about deleting their past contributions.