Popular Nigerian celebrity media girl Toke Makinwa has opened up on why she is with her new lover.
Toke, who is a divorcee, revealed that she’s with him only because of his manh00d.
The Yoruba born serial entrepreneur and YouTube star revealed this in the comment section of one of her recent posts.
Toke Makinwa, who is in London with her alleged new boyfriend, posted a photo and wrote.
“We never really grow old …..
I told the man currently eating my work to let us take our Lori n Michael picture in the snow. The bush in him is too strong. I gave up.”
The troll then commented, “The same man will recreate the same picture with someone he’s crazy about. The bush in him or he’s just about the coochie.”
Toke the replied, “I’m just about the Dxx.” 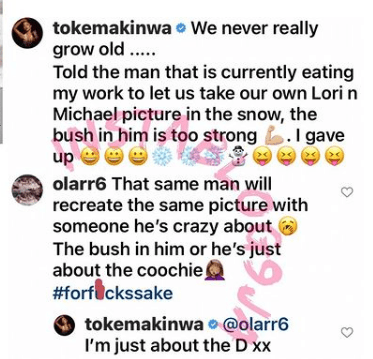 36! Media girl, Toke Makinwa opens up about her struggle to conceive