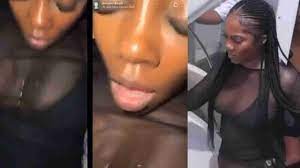 Months after her sxx tape flooded the internet, award-winning singer Tiwa Savage stirred questions when she alluded to falling in love once more.

The mother of one, who has been touring in support of her album “Water & Garri,” claimed that an admirer who attended one of her previous performances had expressed a wish to travel with her to Sweden.

Though Tiwa Savage was disappointed that he couldn’t attend, she became happy as her fans cheered her up.

The females among her fans, in Tiwa’s opinion, are all stunning, and if her admirer had been around, he would have abandoned her for them. “There is one guy that has been toasting me ehnn. So he was with me at the last show, and he was saying to me that I don’t think I can make it here and I was kind of sad but I am happy he didn’t come here, because you see all this fine girls ….I am happy he went home”.

Omg Tiwa about to trend her a*** out for two straight days 😂😂
Stockholm love you so Much @TiwaSavage 👸 ❤️ pic.twitter.com/rQGiKIn8o4

Recall that in February this year, Tiwa in an interview with American OAP, Angie Martinez of Power 105.1 revealed that she’s been blackmailed over a leaked sxx tape of her with current lover.

Explaining how the video got leaked, the singer revealed that her lover mistakenly uploaded it to Snapchat and the video was captured before it was deleted.