Uche Elendu a Popular Nollywood actress and entrepreneur, has advised women seeking relationship with men that the way to a man’s heart is not through sex.

The screen divs said this in an Instagram post noting that ladies who indulge in these act just turn out to be “sex buddies.”

“If you are hoping to get to a mans heart through sex then all you will end up with is a “sex buddy,” she posted.

“Not a partner, not a boyfriend not a husband, she said further.

According to the actress, such ladies get heartbroken after being attached to the man who in return won’t want anything real with such a woman. She concluded saying sex is overrated this days.

“You’ll end u with a broken heart because you’ll get so attached to him and he won’t want anything real with you. Sex is simply overrated this days, there’s more to a relationship she said.

The actress while revealing what prompted her advise said that it is impossible to surf the social media these days without people talking about sex. 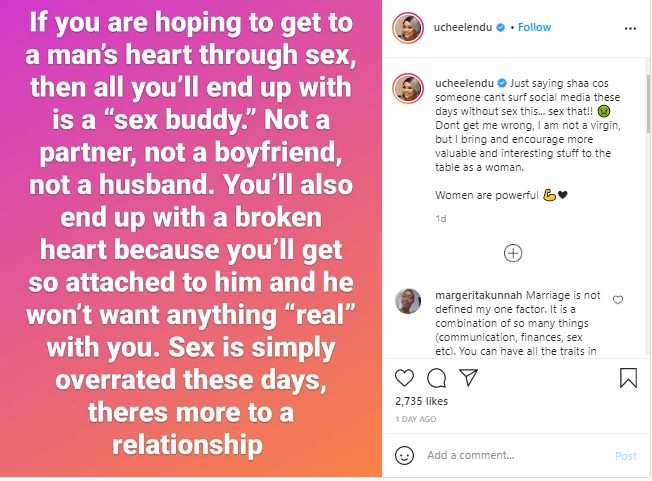 Meanwhile, Georgina Onuoha, a US based Nollywood actress, who is now a certified medical practitioner has reacted to the feminist post by Pastor Mike Bamiloye, who is also an actor and filmmaker.

While advising women to withdraw their support for the feminism movement, the Mount Zion Ministry’s drama leader had said being a feminist can mislead women from the will of God.

“If you are a Single Sister, DONT JOIN THE FEMINIST MOVEMENT! The Feminist Movement May make you miss the Will of God for your Life. If you are MARRIED, don’t join them either, IF YOU WANT TO GET THE BEST OUT OF YOUR MARRIAGE. The Feminism want to CONTEST the Head of the Home,” he wrote.

THERE IS NO STOPPING WITH THE BUCKET HAT TREND