Report reaching Glamsquad Magazine, is that the latest beta of iOS 15.2 adds an Apple Communication Safety feature to the Messages app.

By scanning incoming and outgoing images for “sexually explicit” content, the opt-in feature is intended to protect children from inappropriate imagery. Any images that match this description are blurred, and the child is warned about their contents and told not to view them. 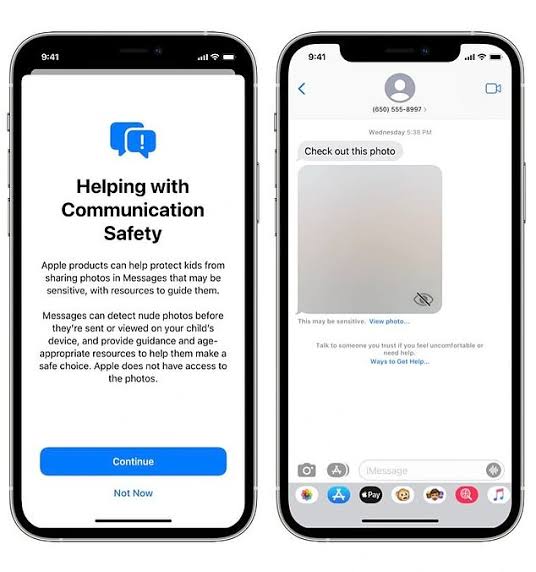 The feature, which integrates with Apple’s existing Family Sharing system, is also intended to provide resources to affected children in order for them to seek help.

The version of the feature included in the latest beta of iOS 15.2 differs significantly from what Apple announced in August: it will not notify parents if their child views a sexually explicit image. Critics, such as Harvard Cyberlaw Clinic instructor Kendra Albert, were particularly concerned about this element because it could expose queer or transgender children to their parents. According to MacRumors, the feature could have introduced safety issues in its original form if a parent is violent or abusive.

Glamsquad Magazine gathered that, children will instead have the option of alerting someone they trust about a flagged photo, which is distinct from the option of unblurring and viewing the image. The checks are performed on-device and have no effect on end-to-end encryption.

The Communication Safety feature was announced in August as part of a trio of features aimed at protecting children from sexual abuse. However, in response to privacy advocates’ concerns, the company announced that the features would be delayed until the following month.

Communication Safety is distinct from the CSAM-detection (child sexual abuse imagery detection) feature, which scans a user’s iCloud Photos and reports offending content to Apple moderators and was the source of the majority of privacy advocates’ outrage.

READ ALSO: 5 Important Lessons You Should Teach Your Children

There will also be an update to Siri search that will provide resources if a user searches for topics related to child sexual abuse. It’s unclear when these two features will be available, and there haven’t been any reports of them appearing in Apple’s public beta software.

It’s worth noting that features added to iOS 15.2’s latest beta may change dramatically before the official release, and they may be removed entirely. Other new features in the latest beta include manual AirTag scanning and the option to pass on your iCloud data to a loved one in the event of your death.

Revealed: How you can be hacked through WhatsApp