The now 19-year-old E! star and cosmetics mogul-in-the-making is the one who flew the roost a few months shy of her 18th birthday, settling down not far from sisters Khloe and Kourtney Kardashian in The Estates at the Oaks, one of many well-manicured gated communities in Calabasas—established officially in 1991 and re-established in 2006 when Keeping Up With the Kardashians premiered. 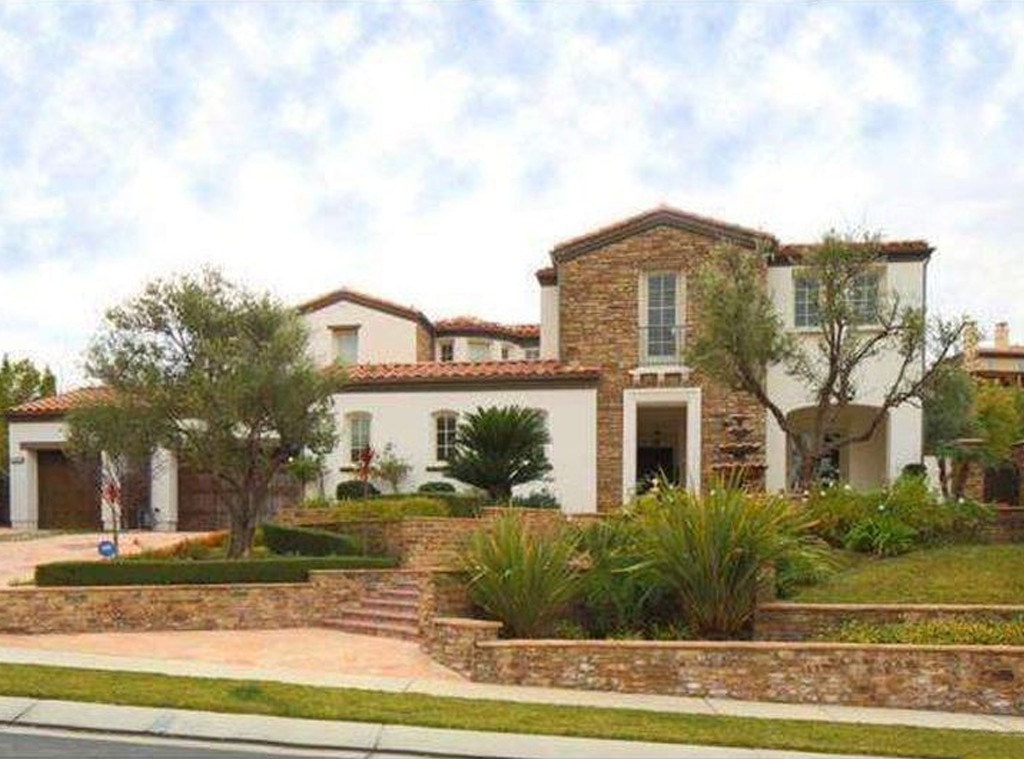 The neo-Tuscan mansion boasts five bedrooms, one of which was converted into a glam room for, you know, getting glam; 6.5 baths; a movie room; a closet just for accessories in addition to the master walk-in; a chef’s kitchen; a great room with a massive fireplace; an eco-friendly Sunrun solar array; and throughout, now that Kylie’s had her way with it, the family’s signature monochromatic color scheme—ebony floors and crisp, white walls. 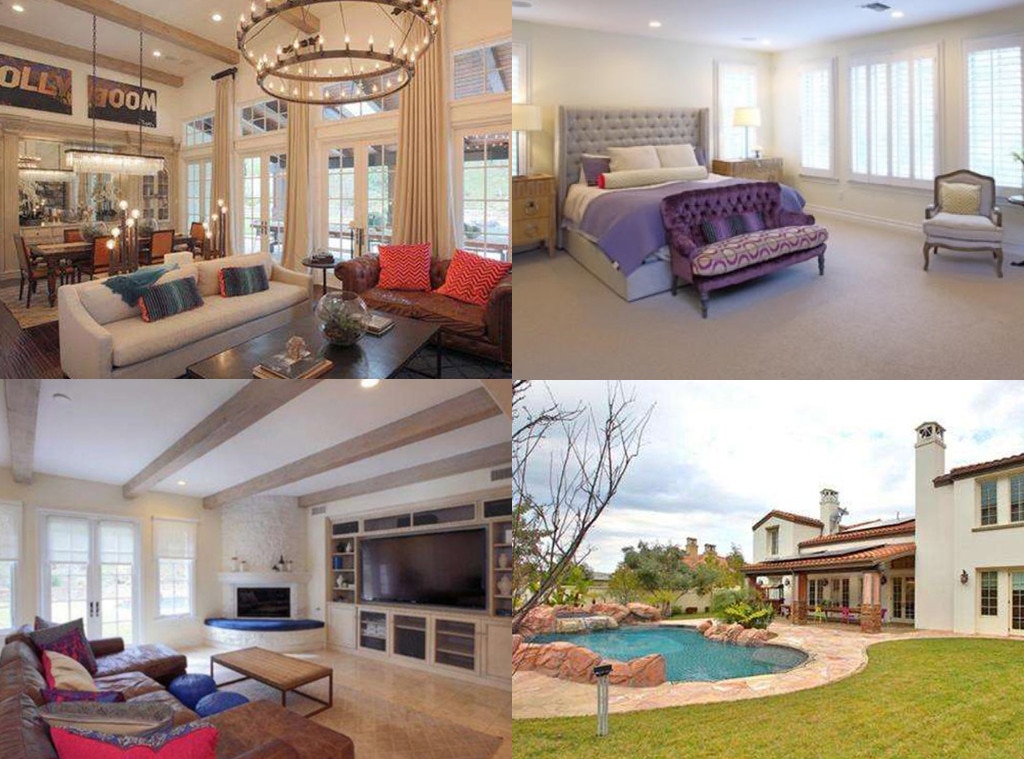 But let’s back up a bit and recall the family digs Kylie fled for coming-of-age freedom.

Kris Jenner has lived in her 8,860 square-foot mansion in Calabasas’ Hidden Hills (a sprawling gated community that’s a favorite among celebs and well-heeled folks who keep horses) since 2010, when she bought it for close to $4 million. Six bedrooms and eight bathrooms still give her kids and their many pals plenty of room to roam around when they’re visiting—or moving right on in, as Kim Kardashian and Kanye West did while their Bel Air home was being renovated. Which gave them plenty of time to realize that they’d actually rather be based closer to most of the rest of the family in Calabasas.

Magical things like this do happen at Mama Kris’ house, after all.

But more on Kimye’s game of musical houses later. Back to the young tycoon.

Kylie went ahead and bought a home in Hidden Hills as well in May 2016, paying a reported $6.025 million for the 7,040 square-foot East Coast traditional with six bedrooms and seven bathrooms. 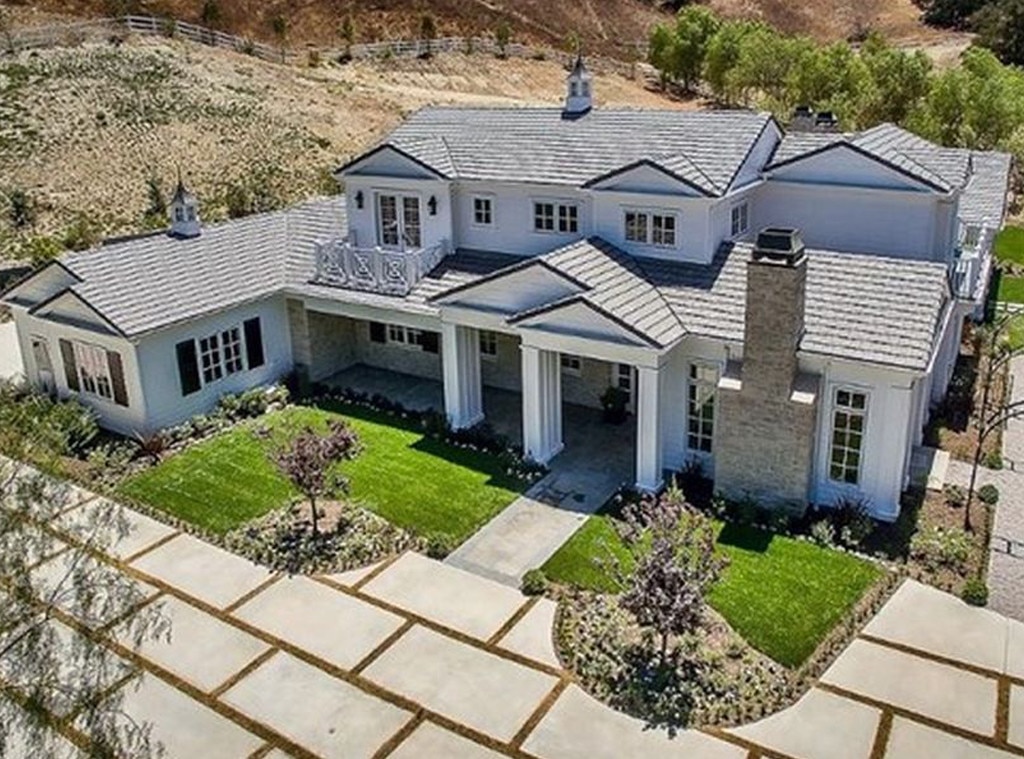 With that purchase she acquired a 4.5 acre lot with a solar-heated pool, covered patio, a four-car garage, an electric car-charging station and enough room for a barn or guesthouse on the property. Inside, there’s wine storage under the stairs, which is always cool, especially when the owner is old enough to legally drink. 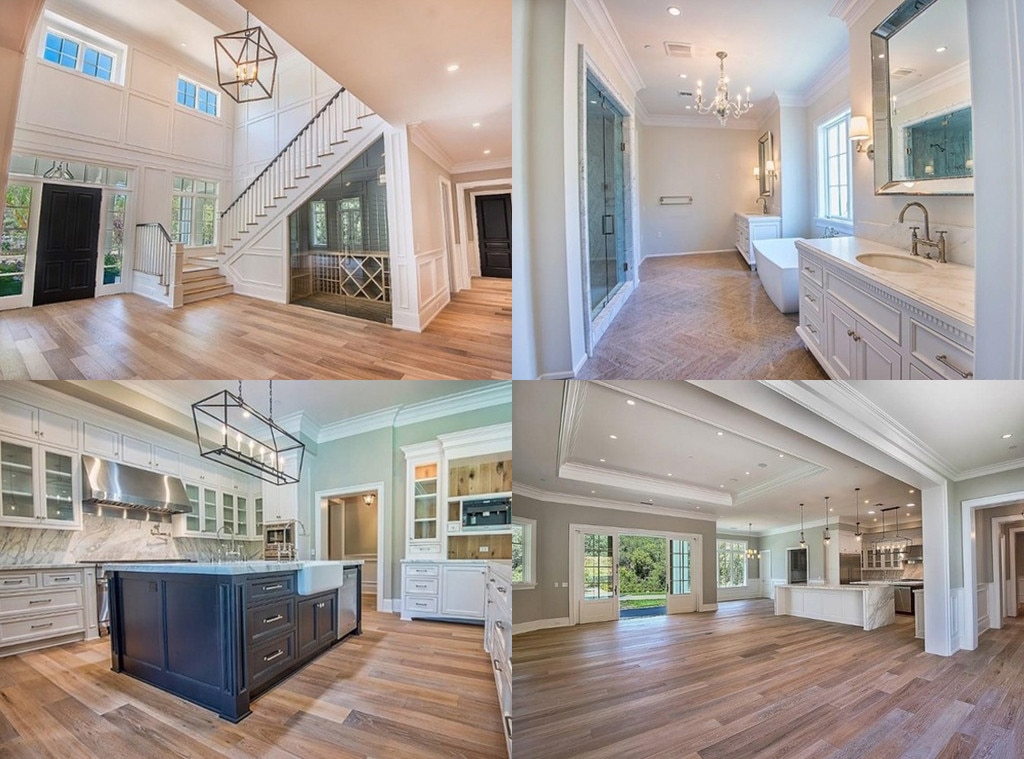 The following month, June 2016, she listed the Calabasas home for $3.9 million. The economy not always obliging, the house remains on the market for the reduced price of $3.3 million.

Yet in August 2016, the first Hidden Hills home was feeling lonely, so Kylie bought the wee 5,154 square-foot house next door for $4.5 million. It was rumored that she was going to convert the four-bedroom, 3.5-bath house into a headquarters for her growing cosmetics company, but she listed the mid-size property in December for $5.4 million. 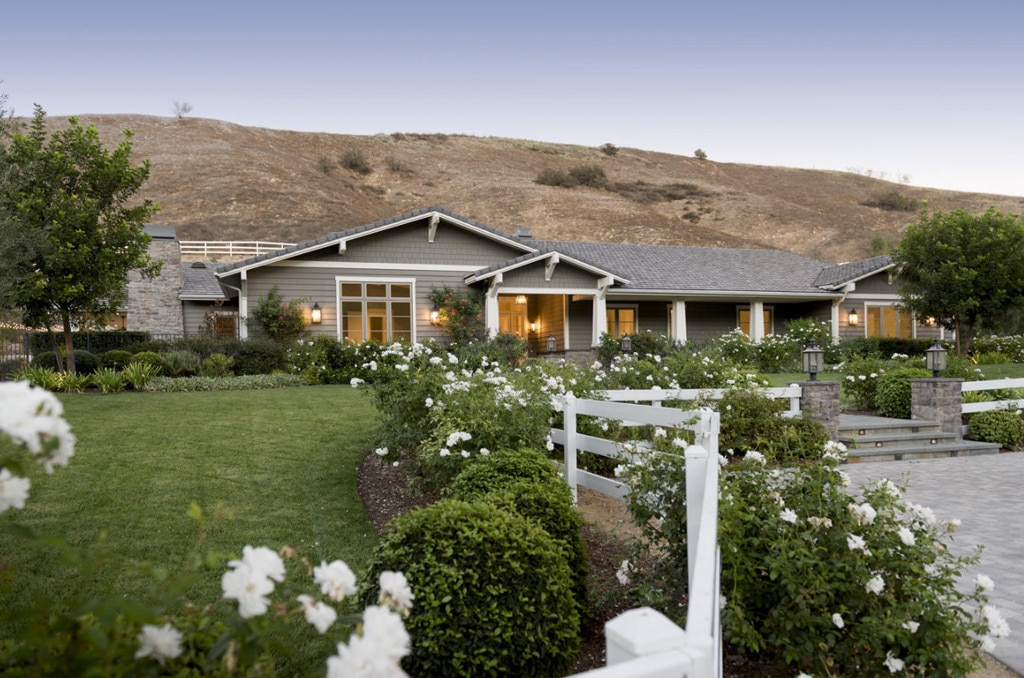 So that makes two houses for Kylie on the market. 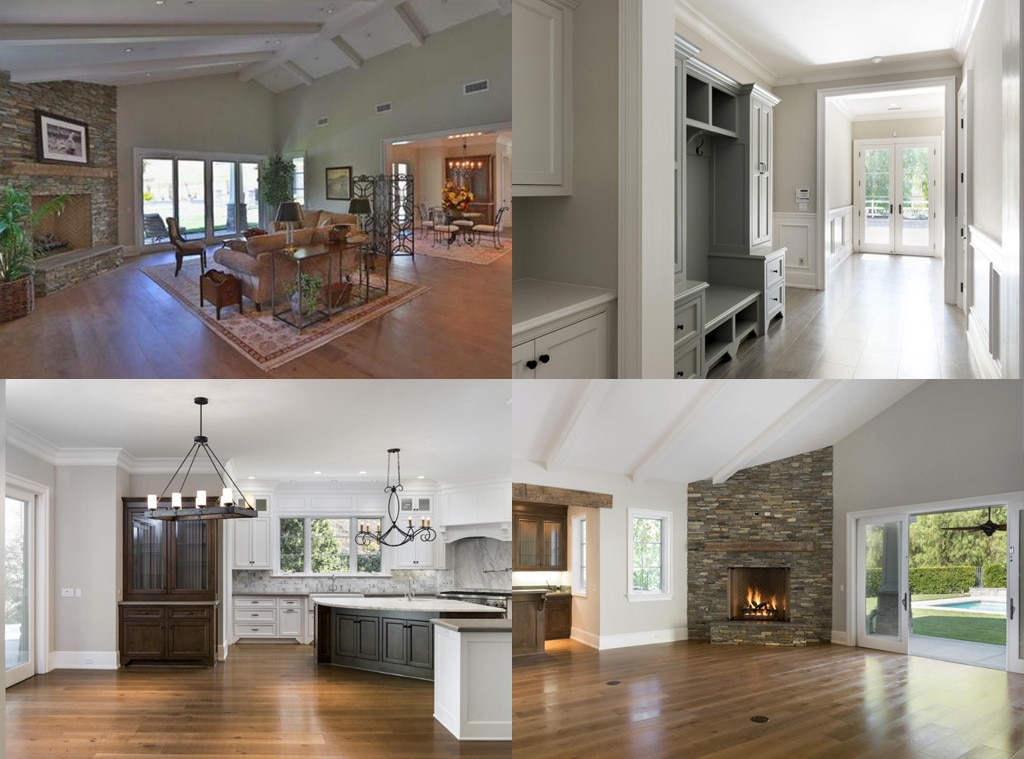 However, she didn’t list that one until after she had bought a third home in Hidden Hills (and fourth overall in two years), her biggest splurge yet and where she’s decided to call home herself for now.

For $12 million she snatched up a Cape Cod-style, 13,200 square-foot home on 1.4 acres, with eight bedrooms, 11 bathrooms, a home theater, a game room and a massage room for the utmost in staycation comfort. 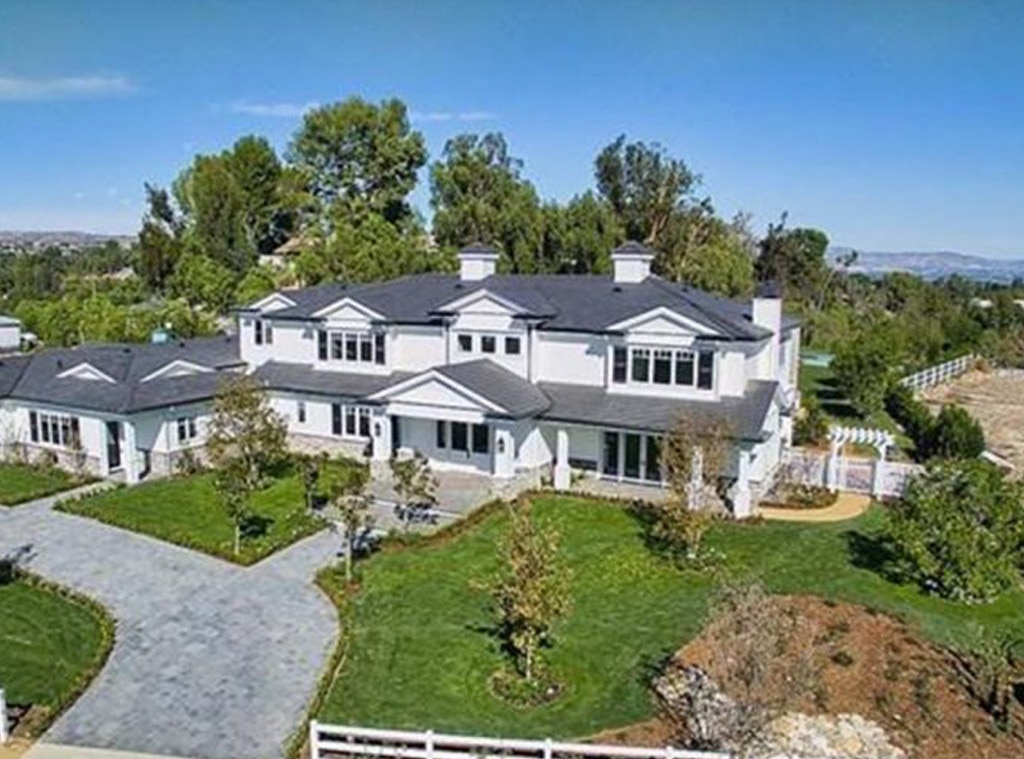 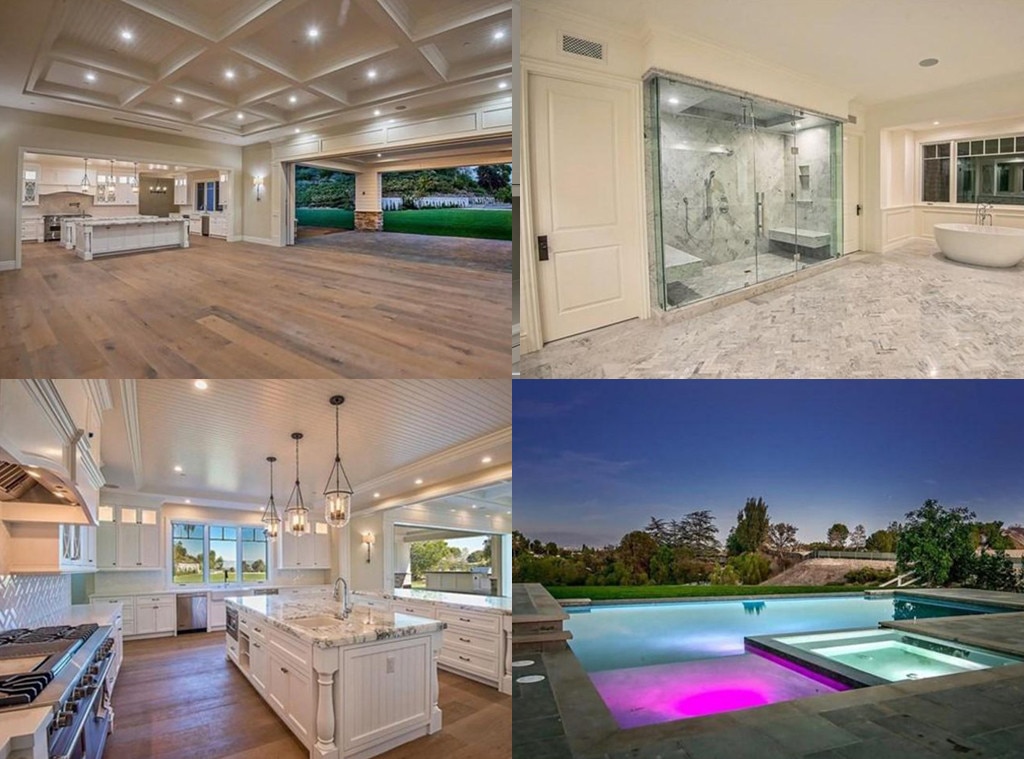 And not to give you whiplash or anything, but remember that first Hidden Hills abode? The six-bedroom, seven-bath one Kylie purchased last May?

Brother Rob Kardashian and Blac Chynarented it from her for a time, desiring the extra space—and the proximity to mama Kris—after their daughter Dream Kardashian was born. 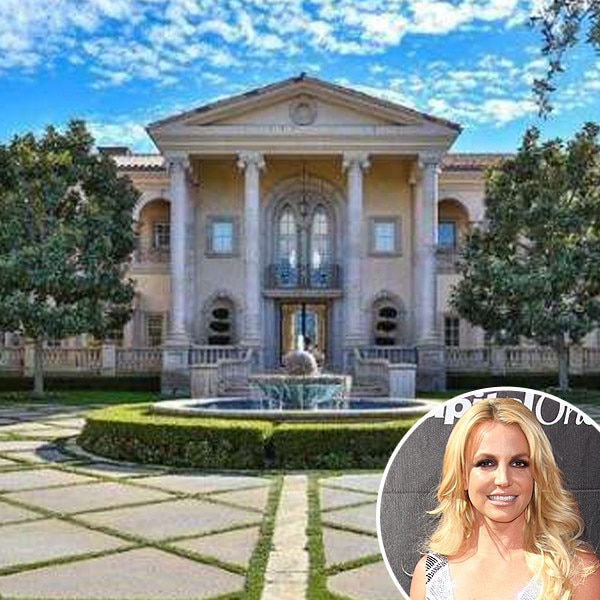 They also maintain separate residences, Rob living near where Kylie used to live, in the Oaks, in a 4,256-square-foot house purchased by Kris last February for $2.3 million. 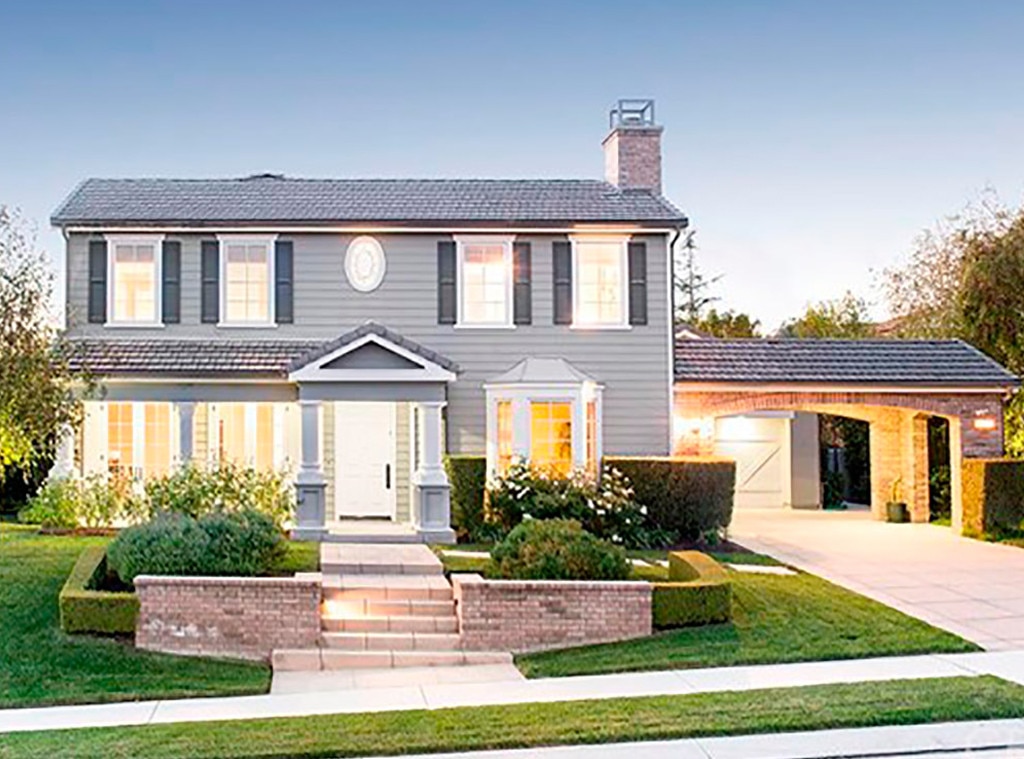 The four-bedroom house was fully equipped with a top-of-the-line kitchen, a formal dining room and butler’s pantry, a spacious family room with fireplace, a pool and spa, and an outdoor kitchenette. 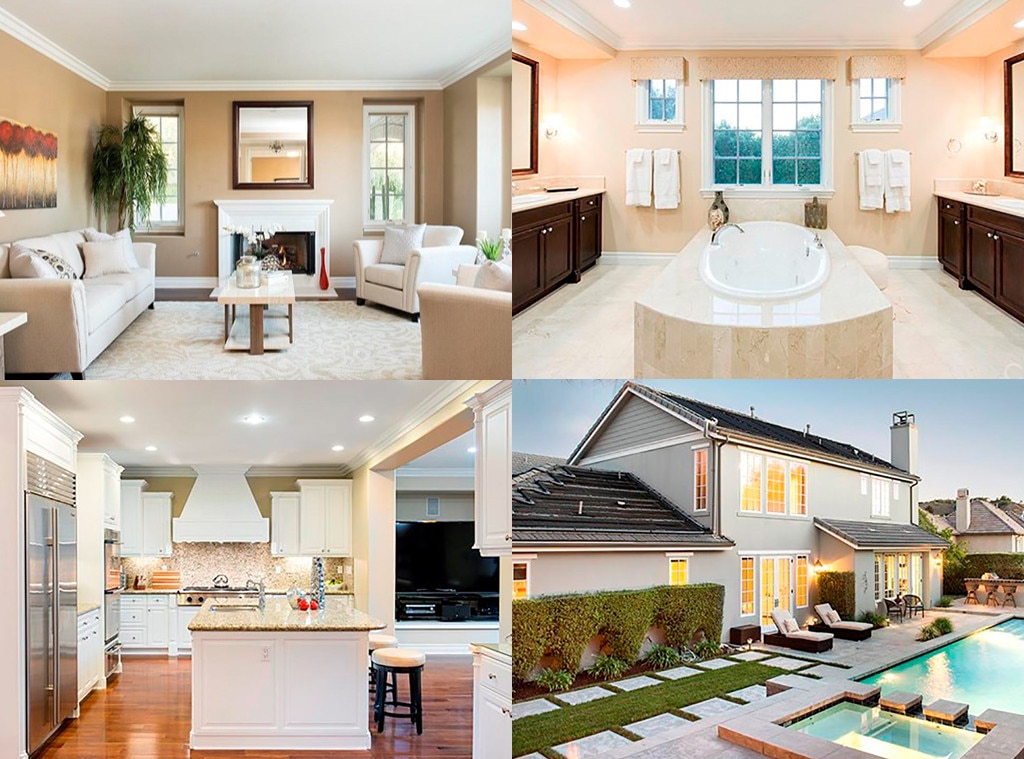 “The Oaks really is a wonderful place to live,” realtor Emil Hartoonian of The Agency, which handles a lot of property in the Oaks, told E! News when Rob moved into the neighborhood. “It allows residents to tune out the city while offering all the amenities that a high-end community can offer. It is a safe, gated community that the most picky buyer will find what they are looking for.”

Which is why both Kourtney and Khloe Kardashian live there too!

The ladies have come a long way from the three-bedroom, 2.5-bathroom townhouse they lived in during the early days of KUWTK. It was also in a gated community, but when you remember how Kourtney was able to throw all of Scott Disick‘s clothes over the banister and they landed right near the front door…

It was comparatively less grand than what they would soon become accustomed to. 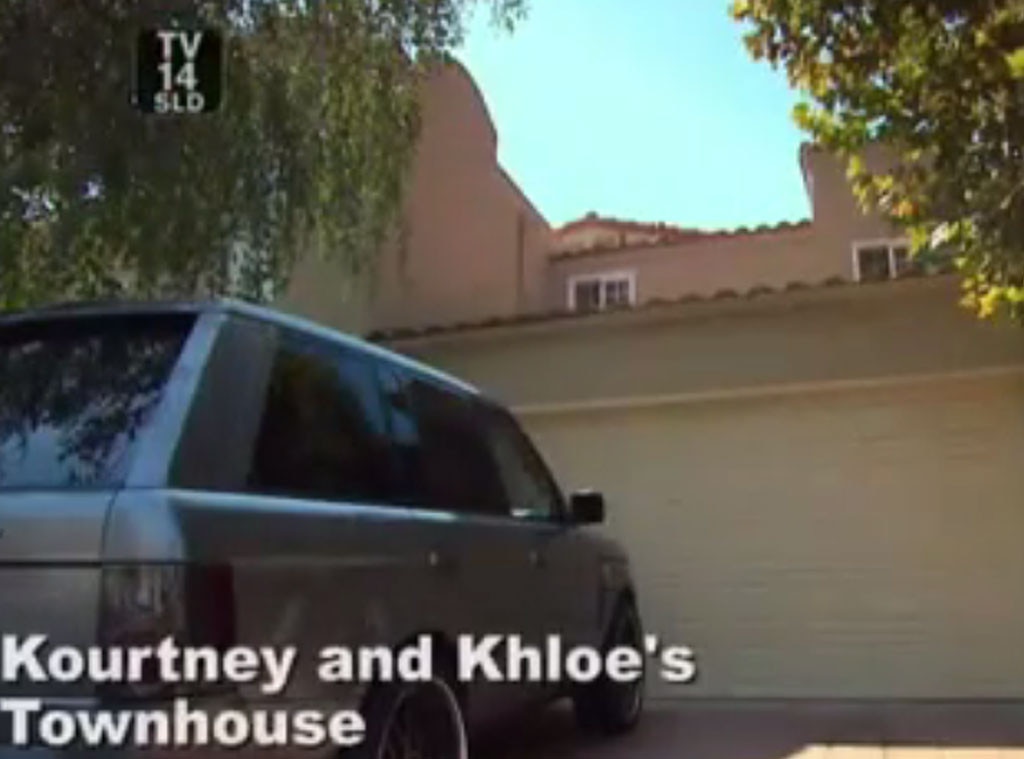 They unloaded the house after listing it for $795,000 in March 2010, after Kourtney and Scott’s son Mason was born.

Khloe had moved in with Lamar Odom in nearby Tarzana, her adventures picking out the seven-bedroom, nine-bathroom house they eventually settled on subsequently chronicled on KUWTK.

Kourtney and Scott, however, traded up for the Oaks and a four-bedroom, 4.5-bath home in 5,199 square feet that Kourtney decorated in “Alice in Wonderland meets Beetlejuice” style, as Scott lovingly dubbed it.

They were happy there for a few years before deciding they needed more space for the growing fam, which—by the time they listed the eclectically decorated home for $3.5 million—included daughter Penelope, and son Reign was on the way. The house sold for $2.975—plus an additional $125,000 so the new owner could keep some of the furnishings.

Kourtney and Scott relocated within the Oaks to the former home of retired NFL star Keyshawn Johnson, who handed over the keys to his 1.86 acre estate for $8.5 million ($2 million less than the original listing price) in January 2014. 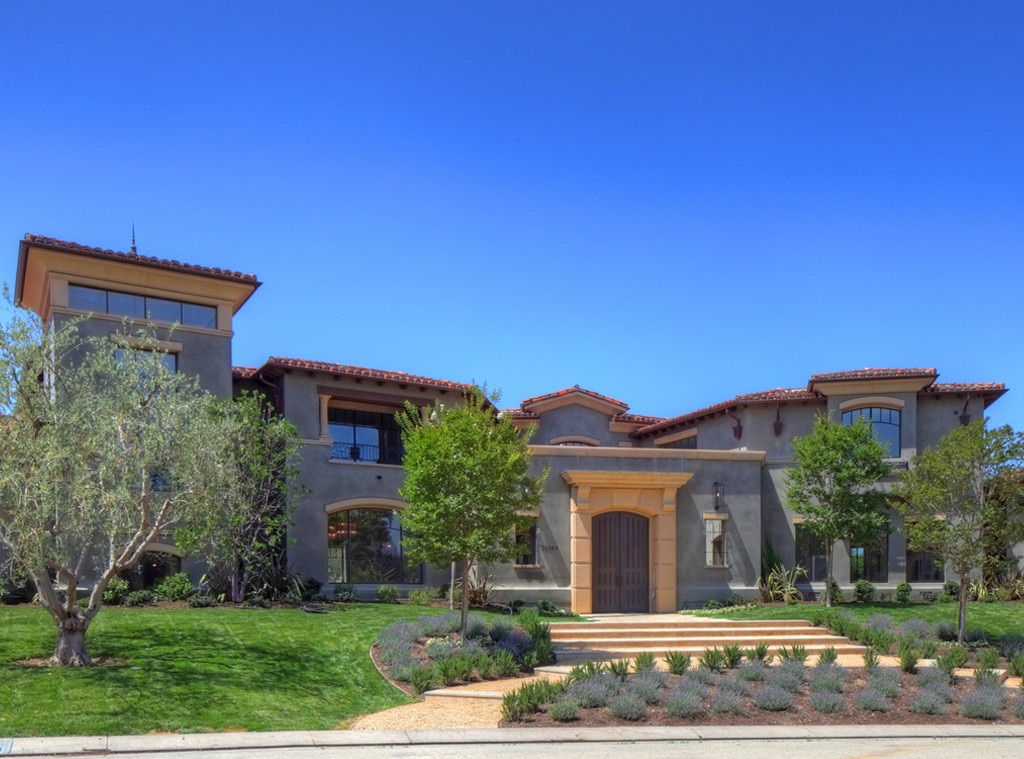 The family of soon-to-be-five settled into six bedrooms, nine bathrooms, a playroom, a chef’s kitchen, an elevator, a theater, a pool, spa, sauna, outdoor fireplace and a sports court. That, and extensive rolling lawns for the kids to run around outside. 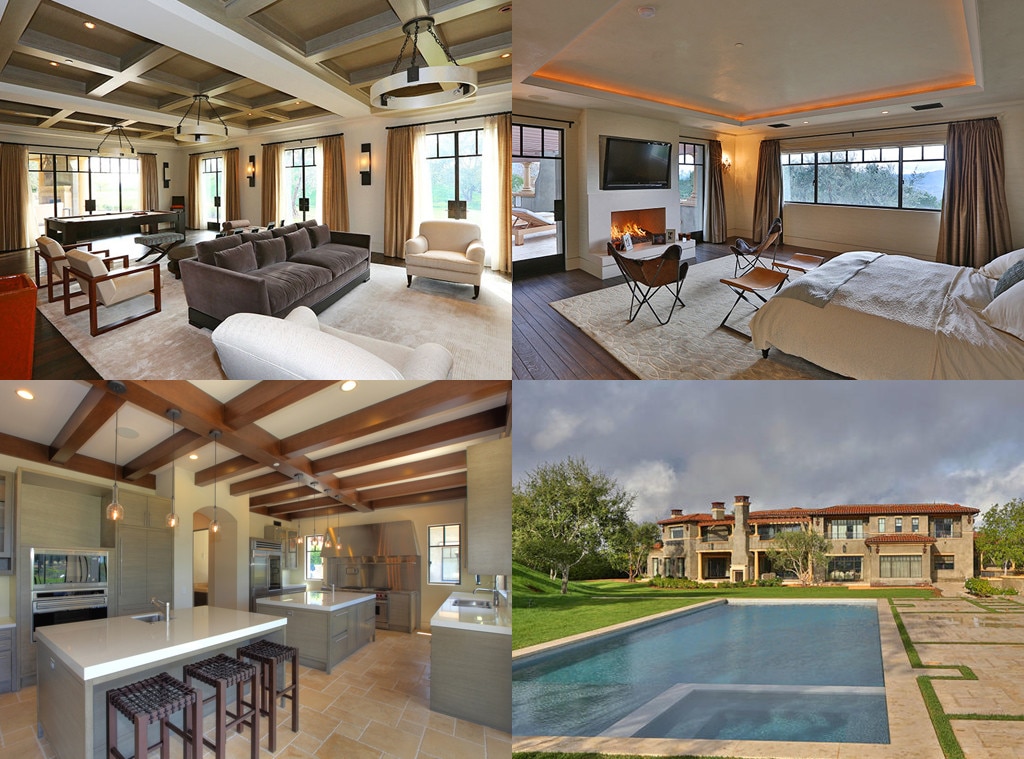 It was no surprise when Khloe decided to move into the neighborhood too when she and Lamar split up. 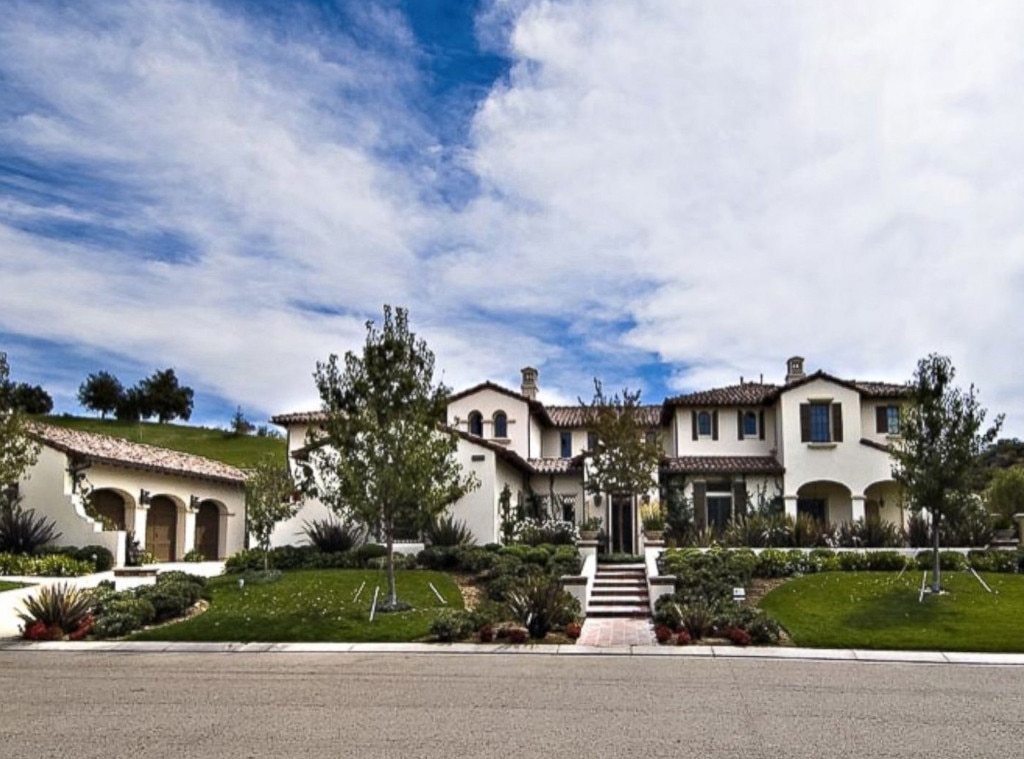 In March 2014, she plunked down $7.2 million for Justin Bieber‘s old place down the street from Kourtney, her new surroundings including six bedrooms, seven bathrooms, mountain views from the master suite veranda, outdoor entertaining space, a pool, formal living and dining rooms with French doors leading onto the patio, a theater, a wood-paneled office and, most importantly, a fresh start. 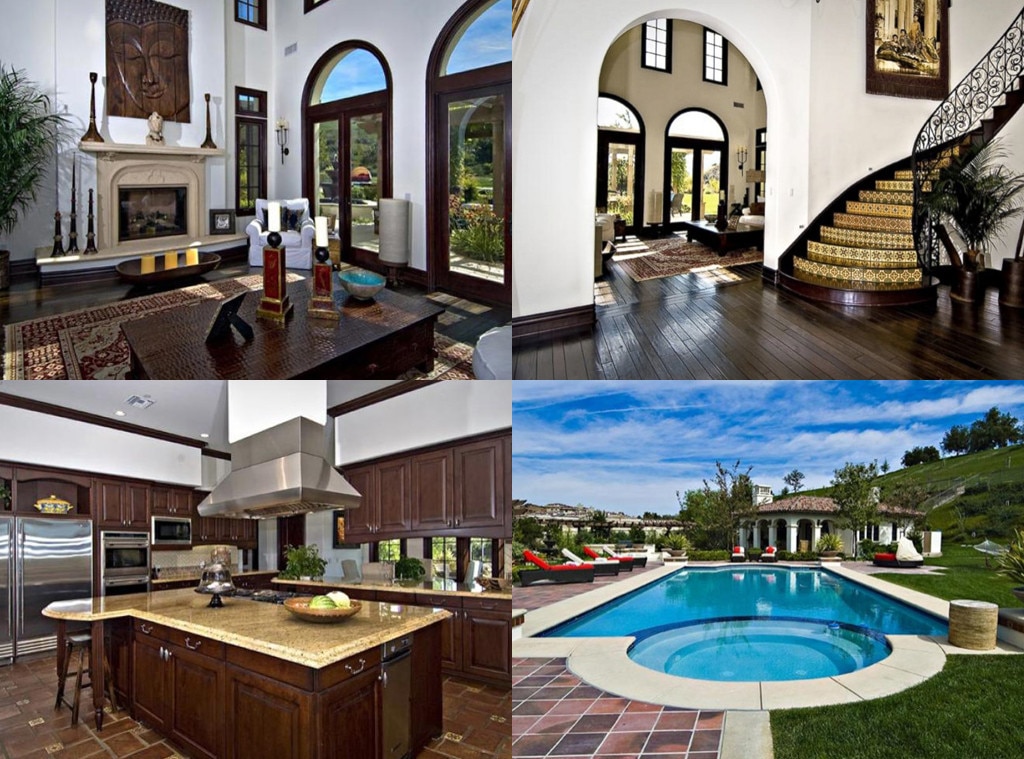 Kourtney and Khloe have been positively sedentary compared to their constantly on-the-move siblings, but Khloe was reportedly spotted checking out houses in Beverly Hills with boyfriend Tristan Thompson in September. And because she spends so much time in Cleveland, where Tristan plays for the Cavaliers, it wasn’t a shock to hear Kris refer to “Khloe’s house in Cleveland” when she was chatting about the family’s respective Christmas decorations in a video house tour for Architectural Digest.

But however much she enjoys The Land, Koko is staying rooted in Calabasas for now!

And when the kids do move, they don’t stray far from the family nucleus—or at least they don’t for long.

Even Scott, when he and Kourtney broke up, bought a six-bedroom, seven-bath home in—you guessed it—Hidden Hills, for almost $6 million. 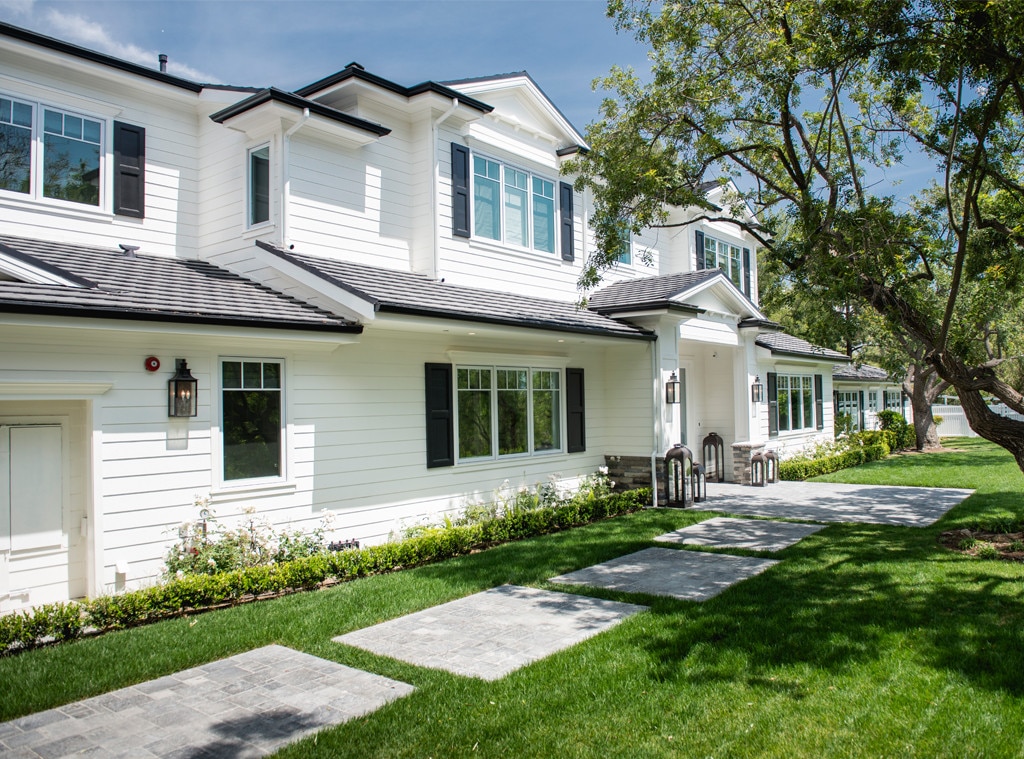 Whether he even intended to stay for long or not (he successfully flipped a place in L.A.’s gated Beverly Park neighborhood in 2014 for $1 million more than he paid), the 8,100-square-foot Cape Cod style home—listed as “The Hamptons in Hidden Hills”—had an entire two-story children’s wing for his three kids and every amenity. 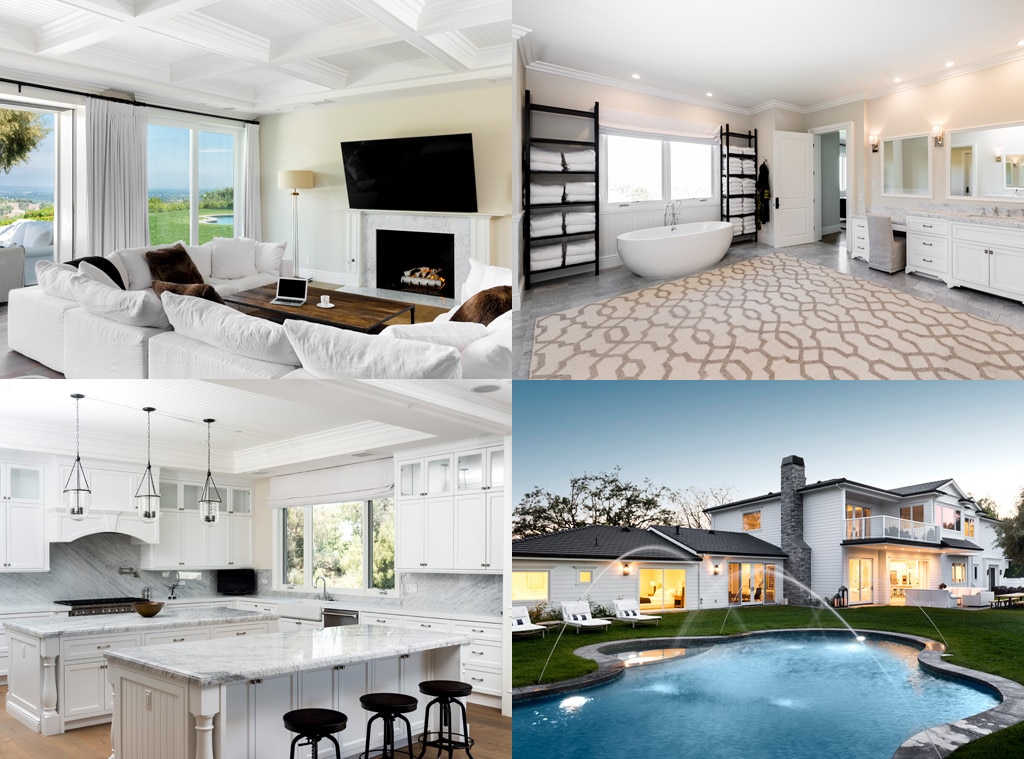 He put the house on the market for $8.8 million last June—not too long after he and Kourtney joked about getting back together on Snapchat.

But don’t worry, Hidden Hills isn’t in any danger of emptying out of extra family members.

Kim sold her five-bedroom bachelorette pad in Beverly Hills in February 2013 after she and Kanye originally bought what they thought was their perfect family home in Bel Air for $11 million. They set about gutting the 9,000 square-foot house to accommodate their vision of a 14,000 square-foot Italian-style villa—which is when they moved in with Kris. 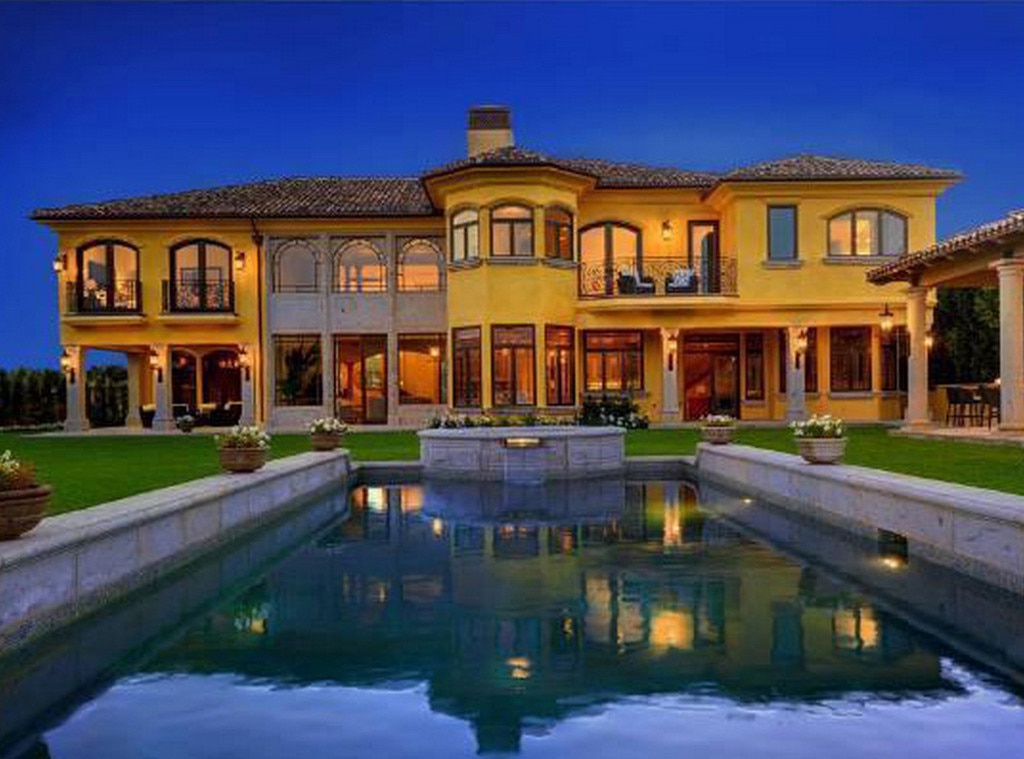 About a year later, they decided that Hidden Hills was where they wanted to be for good, and in late 2014 they purchased a brand-new, 15,000-square-foot French country-style estate on 3 acres. Then they bought the property next door for a reported $2.9 million to ensure more privacy.

And then they started the remodel (though this time they didn’t mind living in the renovation zone, so excited were they to move out of Kim’s mom’s house). 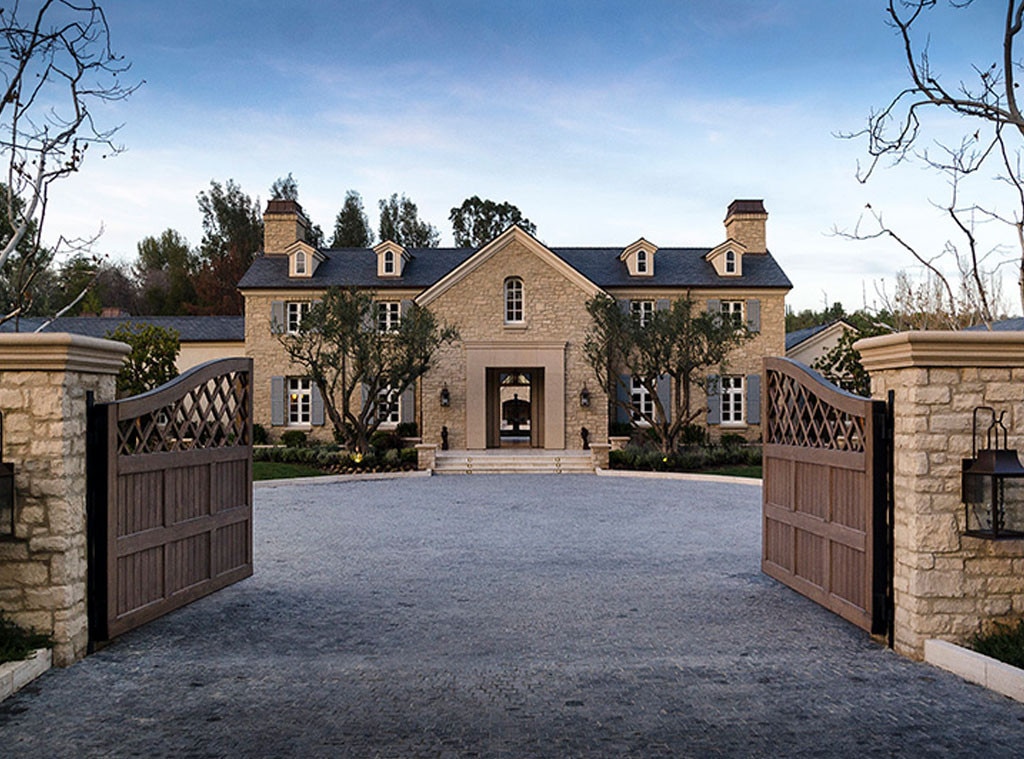 But the $20 million house sure had good bones to start with: amenities listed included a master suite with dual baths, custom closets, a mirrored dressing area, a gym with a steam shower and a sauna, a three-island kitchen, a home theater with suede walls, two swimming pools, two spas, two BBQ centers, a 1,050-square-foot entertaining pavilion, a secluded pool house, outdoor speakers that look like rocks, a sports court, a rose garden and two vineyards. 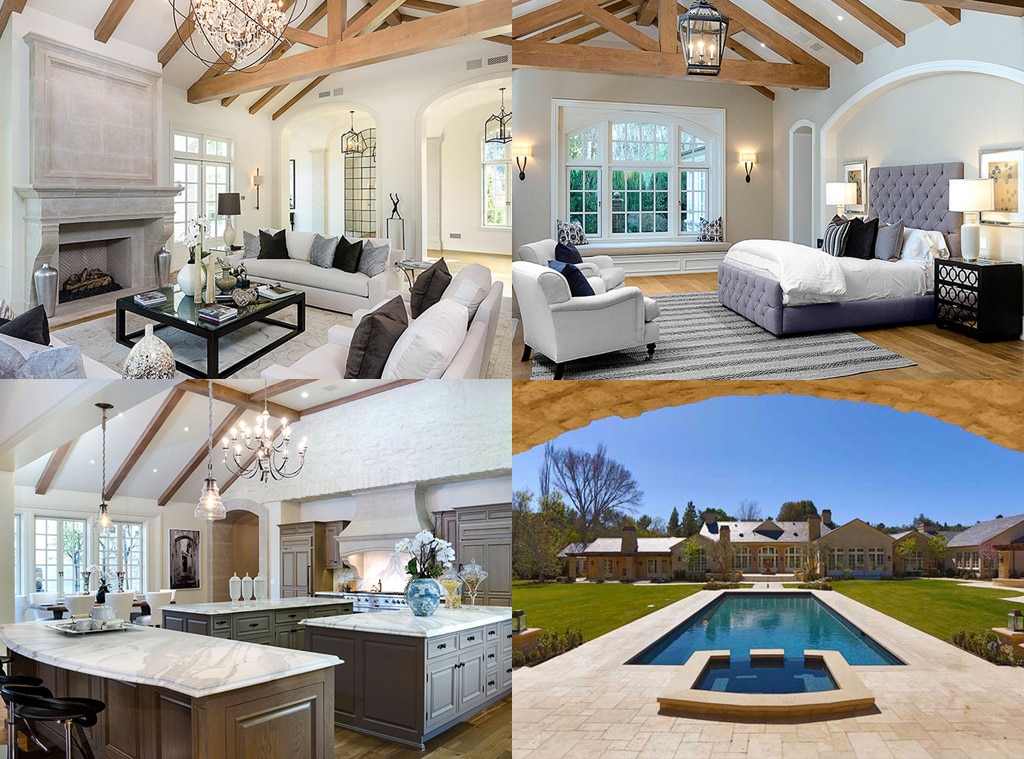 Per the family’s specifications, however, it also needed to boast a two-story playroom, a hair salon, a full spa with facial and massage rooms, and a home studio.

Kim told E! News in March 2015 that they were redoing the house “section by section,” and when it was all done it would be “amazing.” 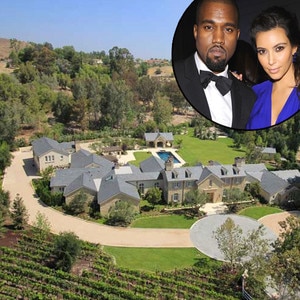 Which brings us to the one who got away—but only about 25 miles away.

Kendall Jenner, who’s hardly ever home anyway because she’s so busy modeling all over the world, started out with a $1.4 million, 2-bedroom condo in a full-service high-rise building in L.A.’s Westwood neighborhood in 2014—and last July, she purchased her first home, all the way in West Hollywood, for $6.5 million.

(Psst, Kris followed suit by purchasing another condo in the same Westwood building for close to $1.7 million.) 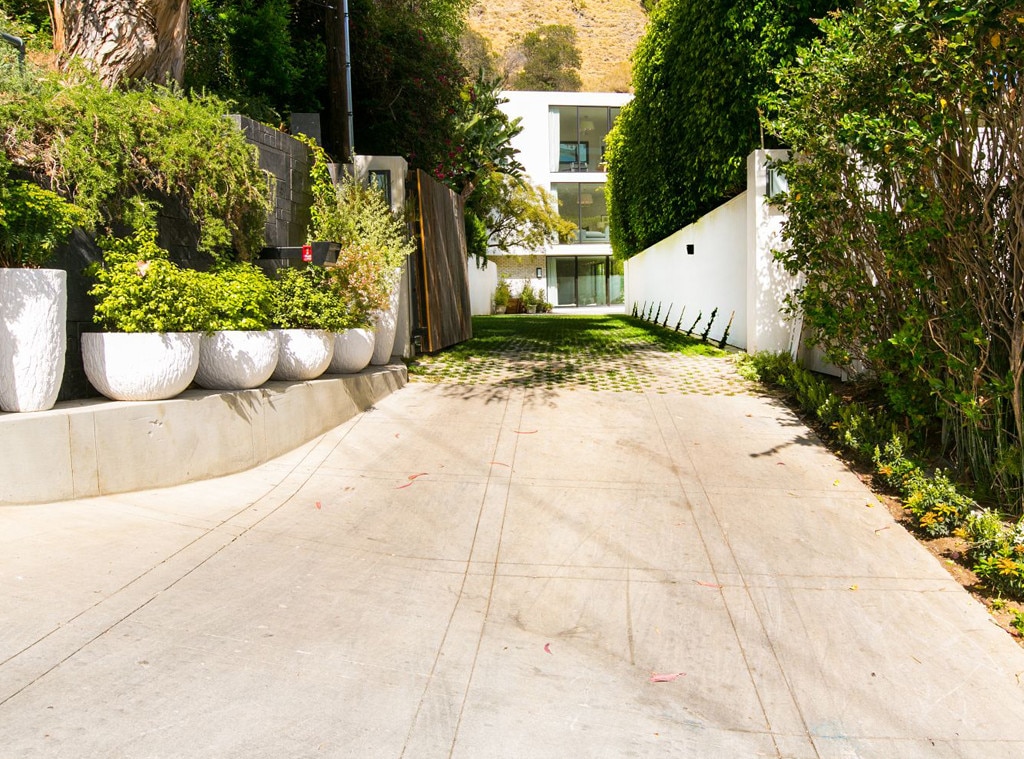 Originally listed for $8 million, the 4,800-square-foot WeHo house on a nearly 16,000-square-foot gated lot previously belonged to Emily Blunt and John Krasinski. Among its envy-inducing features are six bedrooms, five bathrooms, a media room, a gym and a rooftop deck. 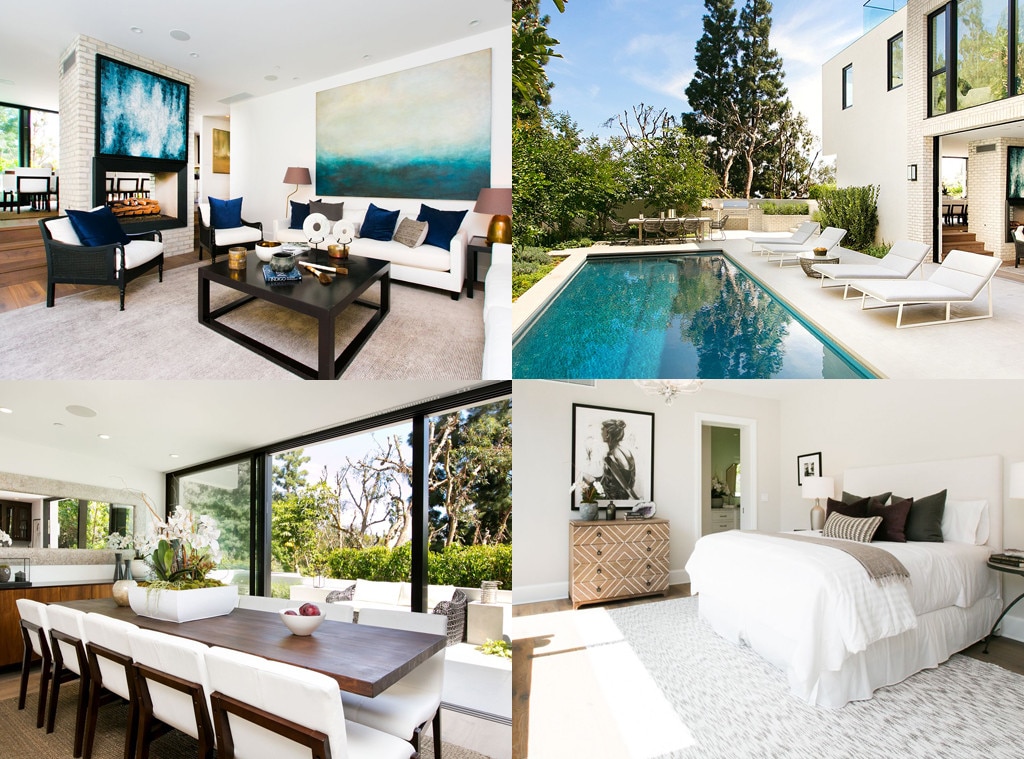 Exactly. It is nearly impossible to keep up with these Kardashians.