After her son reconnected with her baby daddy Batunde Ogunade, acclaimed investigative journalist Kemi Olunloyo broke down in tears.

Kemi Olunloyo, a single mother of three sons, wrote on her Instagram page that she should not be pitied for her own mistake of meeting with the wrong guys.

This comes just a few weeks after Kemi Olunloyo named her baby daddy, saying that Babatunde Ogunade is the Vice President of the Nigeria Basketball Federation and the former Lagos State Chairman of the D’TIGERS, a female basketball team.

According to Kemi Olunloyo, she has nothing to do with how her son met his father, Babatunde Ogunade because they had never met each other since May I986 when he got her pregnant.

She expressed her delight that her son’s father had met her father, noting that she had never sought child support or received any money from anyone in the previous 35 years.

All deadbeat fathers should look for their children, single mothers should keep their heads up, and young females should avoid getting pregnant for men to bind them down, according to Kemi Olunloyo. 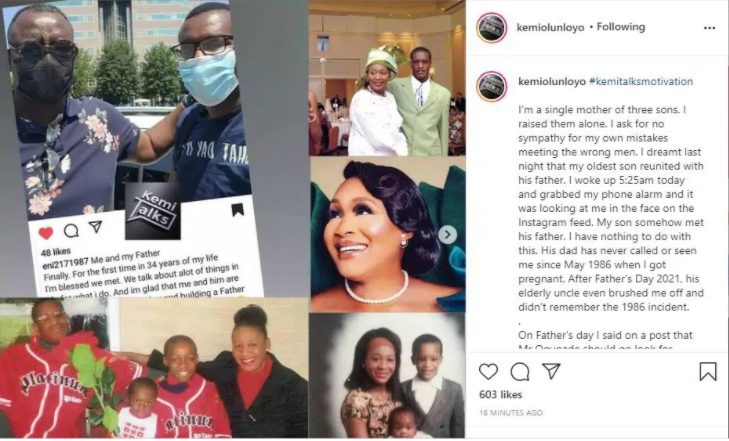 BBNaija: I’m not in a relationship with you – Boma blasts Queen

Fans console Kemi Olunloyo after she cried out over this…

“MY BIRTHDAY WAS NOT SPONSORED BY COZA”- KEMI OLUNLOYO