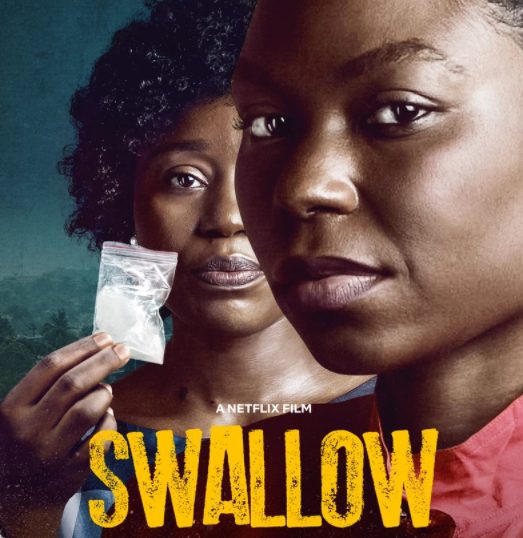 Swallow was released on Netflix on the 1st of October, 2021.

The film, directed by Kunle Afolayan, is based on Sefi Atta’s best-selling novel Swallow, which explores the burgeoning drug trafficking trade in 1980s Lagos, which is struggling under austerity measures and the infamous War Against Indiscipline.

Swallow is a cinematic masterpiece, with Kunle Afolayan opting for a classic film aesthetic that pays perfect respect to a nostalgic past.

Afolayan casts singer Eniola Akinbo aka Niyola in the lead role, despite the fact that she has no formal or informal acting experience, save for music video appearances, and she wasn’t particularly outstanding with her acting; nevertheless, her buddy Rose (Ijeoma Agu) salvaged her character.
Agu was a fantastic actor and perhaps Afolayan’s greatest choice in “Swallow.” As Rose, Agu is the reason why ‘Swallow’ has some replay value, and in a more rational industry, producers would be clamoring for a smidgeon of the charm that she so deftly delivers her characters.

Is ‘Swallow,’ aside from Afolayan’s questionable lead decision, a good watch? Without a doubt, Afolayan has an excellent flair for art direction and is an all-around excellent producer.

In ‘Swallow,’ he flaunts his prowess in capturing the attire, language, and (at times) mundane happenings of the era in which the film is set. Then there’s the conclusion, which will have you giggling like a baby!

0
Richards Michael October 2, 2021
No Comments Yet

Kunle Afolayan opens up on how father died without reward