Facebook Messenger will soon include the “Split the Bill” function to the instant messaging and communications platform, allowing users to see how much they owe and how much they need to pay when going out. Despite the fact that many people boycott Facebook, Meta’s numerous improvements to Messenger show that the business is in it for the long run, with the conversations app remaining its key product.

Facebook Messenger’s Split the Bill feature will be available soon 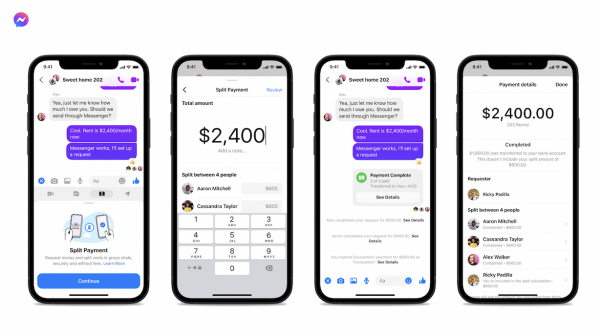 Messenger has now unveiled a future feature that is in the works from the company’s labs, and it will be a pleasure for those who want to split the bill when going out. Splitting the cost will never be the same for couples, groups of friends, acquaintances, workmates, housemates, or family members, thanks to a comprehensive integration on the messaging app.

This is Messenger’s next major update, and the new feature will join the recently announced “Group Effects,” which focuses on AR and visual effects that can be toggled whenever video chatting. Messenger stated that the bill splitting tool is still in development and that what the firm has released is merely an early preview.

How Does Messenger’s Bill Splitting Work?

Split the Bill on Facebook Messenger is a simple feature that can be found in the “Payments” section of any group chat or personal message. The user merely needs to enter the total and choose the persons who need to pay in a certain group, and the system will generate a tailored message to remind everyone.

It would also mark whether or not the transfer was paid in order to avoid failing to settle one’s part with friends or colleagues.

Meta (previously Facebook) went through a hard period in its early days, particularly as it dealt with conflicts and issues that were hurled at it. One of the most well-known difficulties was with its whistleblower, Frances Haugen, a former employee of the firm who claimed and presented proof regarding Facebook’s disdain for the mental health impacts of its platform.

Nonetheless, Meta and Facebook are still here, introducing fresh enhancements and updates to their numerous products that are now available to the public. Messenger’s numerous improvements now add a lot to the messaging app, which has evolved into a more multimedia approach, rather than being a place to talk only, as other chat applications are.