Nigerian star musician, Skales, has bought a new home for his mother.

The musician, whose real name is Raoul John Njeng-Njeng, made the announcement on Instagram on Tuesday.

He posted a photograph of the new home with the caption, “Set a goal for myself to cop a crib for my mama..So excited I did it finally…mama’s new crib alert …GOD BLESS HER..YOU CAN DO

Born to a Cameroonian father, he was single-handedly raised by a Nigerian mother in Kaduna. She did a lot of menial jobs to nurture him.

Not one to mince words about his love for his mother, the 25-year-old owes his love for music to his mum
An MTN ambassador, he is his mother’s only child. His stage name is an acronym for “Seek Knowledge Acquire Large Entrepreneurial Skills”. 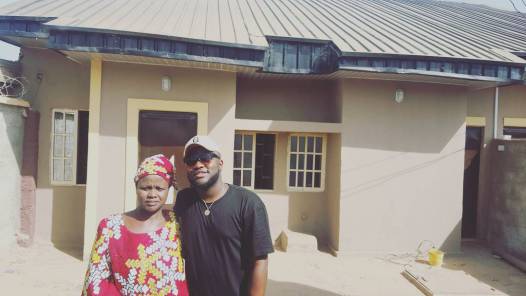 He grew up in a Church setting, and became interested in music while at his mother’s cassette store.
Skales met producers Jeremiah Gyang and Jesse Jagz while he was an undergraduate at University of Jos.
Skales left the University of Jos his junior year and attended Lead City University where he graduated with a degree in Office Management and Technology.

While at the University of Jos, he partook in the Zain Tru Search Competition and won the competition’s North Central region. His debut single, “Must Shine”, was released to critical acclaim.

Singer Skales finally ties the knot with his lover