This seems to be a heartfelt interview for Serena as she shares how she met her fiancé Alexis Ohanian, their love story, her pregnancy, and how she still had to play a tournament while seven weeks pregnant.

According to Vanity Fair, Serena and Alexis will be married this Fall after the birth of the baby.

The magazine describes Serena as “the best tennis player in history, with an aggregate winning percentage of 85.76 percent and 72 tournaments won on the Women’s Tennis Association tour (including the 23 grand-slam victories in 29 singles finals, not to mention 14 doubles finals with sister Venus).”

The tennis star reveals she will return to pro tennis as soon as January because “I don’t think my story is over yet.”

Read excerpts of the feature below: 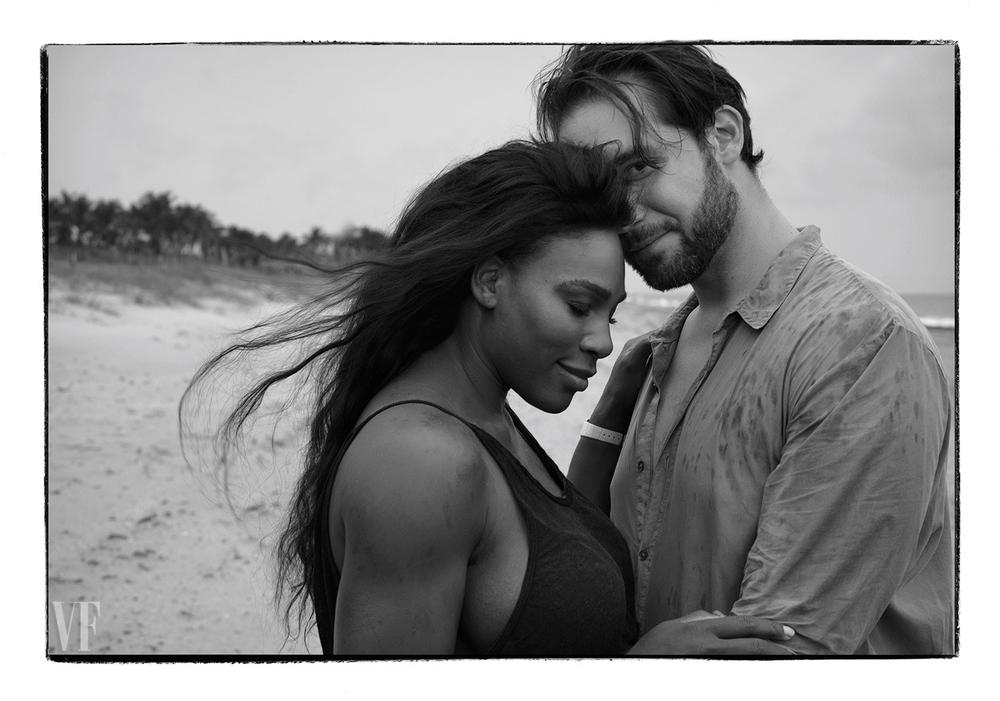 On how She and Alexis met

Alexis and Serena met the way two people do in the best love stories: by chance. Actually, it runs a little deeper than that because, let’s face it, Alexis was initially considered by Serena and the others, she was with to be an irritant they were hoping would just get the hint and go away.

The location was the Cavalieri hotel, in Rome, on May 12, 2015. That night Serena was about to play her first match in the Italian Open. She is not a morning person and usually doesn’t eat breakfast, but the buffet offering at the Cavalieri was beyond extravagant and Jessica was champing at the bit, so they went to try it along with longtime agent Jill Smoller, of William Morris Endeavor Entertainment, and Zane Haupt, who handles some business-development opportunities for Serena.

The buffet had closed down five minutes before the group got there, so their only recourse was to go to the pool area and sit at a table for four and order breakfast. Other people on Serena’s team were expected at an adjoining table.

The night before, Alexis had stayed up until one or two in the morning drinking at a café with Kristen Wiig and friends—Wiig was in Rome shooting Zoolander 2, and he knew her cousin, so he introduced himself. He passed out when he got back to the hotel, where he was staying for the Festival of Media Global conference, and was slightly hungover when he came down to breakfast. He too headed out to the pool area. Which is when he decided without thinking about it to sit at the table next to Serena, his only interest to get coffee and food and put on his headphones and work on his laptop. Which struck Serena and the others as a pain in the neck, since Alexis had a choice of other empty tables.

On Alexis attraction to Serena

Alexis knew then he wanted to marry her, not simply out of happiness or compatibility. She was helping him become the best version of himself because of her own work ethic and focus, with millions watching and the expectation of the public that she should win every time, what Serena herself described as carrying “three pyramids” on her shoulder. He thought he worked hard—it is part of the romance of high tech that everyone works 18 hours a day and then curls up under the desk for a few hours’ sleep with their laptop as teddy bear and pacifier—but he realized it was nothing compared with Serena.

“I felt like a door had been opened to a person who made me want to be my best self. . . . I find myself just wanting to be better by simply being around her because of the standard she holds.”

… Serena wasn’t happy. Actually, she was livid. But after she got on the plane, she realized that he was flying her out for only one reason. “I knew it was coming. I was like, ‘Serena, you’re 35, you’re ready. This is what you want.’ ”

Alexis picked the same room they had shared a year earlier, the hotel at his instruction filling it with flowers. He took her downstairs to the same table by the pool area where they had first met. No one else was there, since the hotel, also at his instruction, had cleared everyone else out. He retold the story of how he had met her for the first time at this exact spot two years earlier. On the table was a little plastic rat.

Alexis got on one knee and proposed.

Finding Out About the Pregnancy

… But she felt a little different physically. She had unexpectedly thrown up at one point and her breasts had enlarged. She thought it might be hormonal. But her friend Jessica Steindorff immediately suspected something else and suggested a pregnancy test. Serena thought it was ludicrous.

Jessica worked on her for two days until Serena relented, and so Jessica went to a pharmacy and bought a pregnancy kit.

How she told Alexis about the baby

Once Serena knew she was pregnant, she called Alexis and told him he needed to come to Melbourne earlier than planned. She did not give him the reason, but Alexis thought it was likely health-related and immediately got a United flight out of San Francisco. When she saw him, not a word was said.

She handed him a paper bag with the six positive pregnancy tests.

He was as shocked as Serena. But there wasn’t time to dwell. 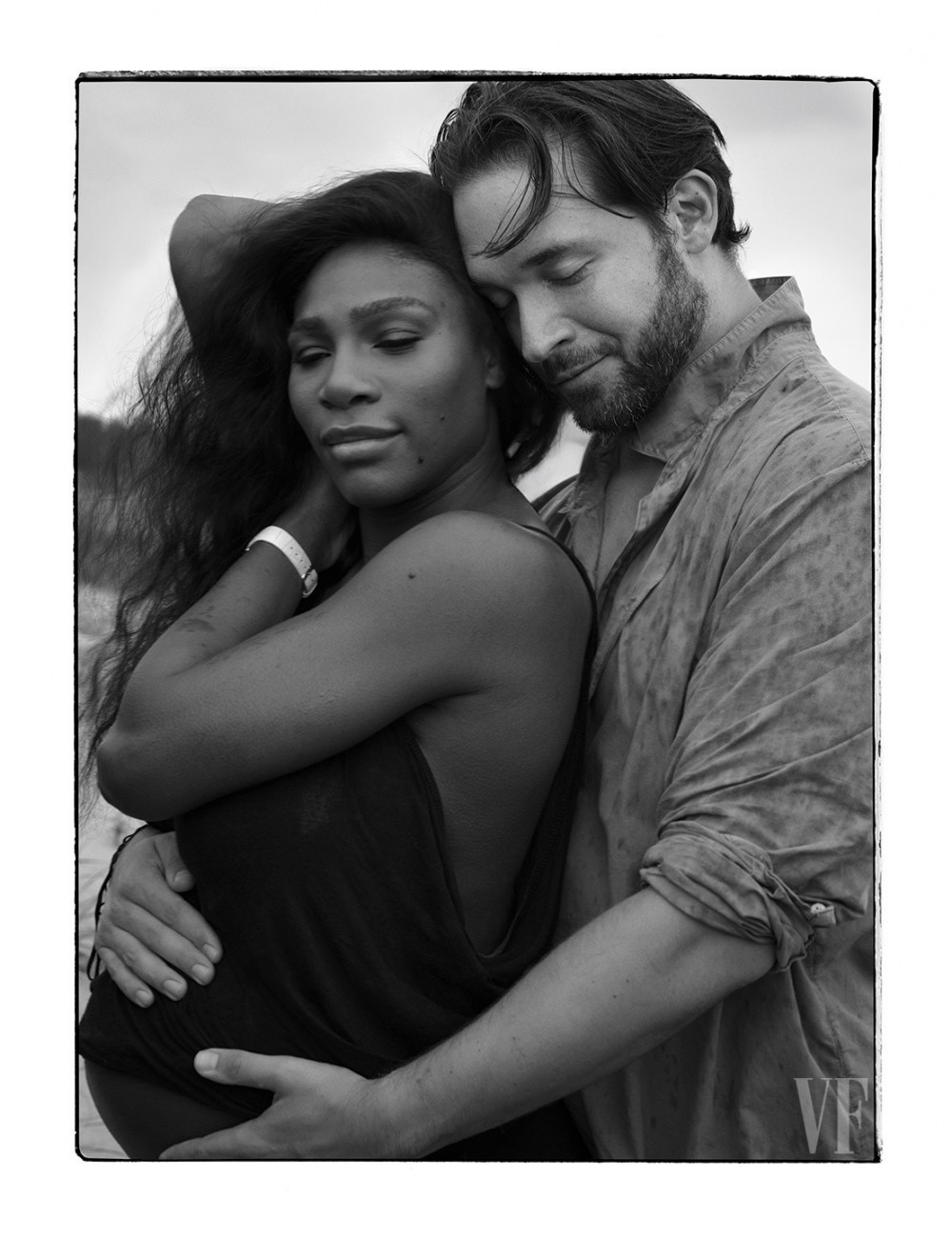 She played The Australian Open while pregnant

The Australian Open was about to begin, and an immediate medical determination had to be made on what risk there might be in playing. The doctor who examined her thought she was about three or four weeks pregnant—it was almost impossibly hard to tell because the fetus was so small—and said there was no risk whatsoever. When Serena returned to the States and had a subsequent exam, it was discovered that she had actually been more advanced, about seven to eight weeks, but she said she still would have played. There were only five people who knew during the tournament: Alexis, Jessica, Jill, Venus, and the doctor. Not even Serena’s coach knew. Nor did tournament officials.

Serena is now a little more than seven months pregnant. “It just doesn’t seem real. I don’t know why. Am I having a baby?” she says.

“If you would have told me last year in October or November that I would have a baby, not be pregnant but have a baby, I would have thought you were the biggest liar in the world. This is kind of how I am right now. This is happening sooner than later, and it’s going by so fast,” she added.

“What Is age appropriate?”- Nicole Kidman Sparks Debate After Feature on the Cover of Vanity Fair