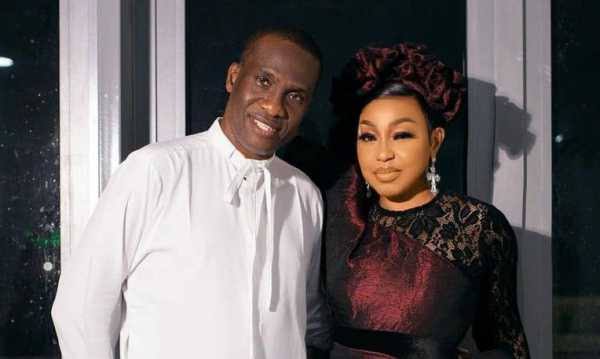 Nollywood actress, Rita Dominic and her husband, Fidelis Anosike have reportedly welcomed a set of twins.

According to reports making rounds on social media, the newlyweds welcomed twin girls in the United Kingdom.

Glamsquad notes that the actress didn’t fluctuate a baby bump. However, at the time of her wedding in April, there were speculations that she was already pregnant.

Read Also: Kanye West Denies Reports Of Putting Up His Music Catalogue On Sale For $175 Million

Shortly after the wedding, there were allegations that Rita’s husband was cheating on her with her friends. However, she failed to respond and posted pictures of herself and her husband instead.

While social media continues to buzz with congratulatory messages since the news broke out, some Netizens claim the actress is on a movie set in Calabar.

There could be an indication that the couple who tied the knot on 19 April 2022 in Imo State could have welcomed their children through surrogacy.

Glamsquad recalls that Nollywood actress, Ini Edo welcomed her first child through surrogacy. According to the curvy actress, she chose the path to fulfil her dream of becoming a mother.

In an interview with Lilian Afegbai on her talk show Lilian’s Couch, the curvy actress said

“Yes I do have a daughter and I had her through surrogacy. The eggs are mine and so genetically, she’s my blood”.