This is coming after a video of Zlatan denying DJ Cuppy at an interview went viral.

In the interview he said he did not know who bared the name Cuppy.

The question of why he blocked the DJ was asked weeks after the DJ said she was blocked by the singer.

Well, Afeare has shared what went wrong between Zlatan and DJ Cuppy in an Instagram post on Friday.

He said Zlatan did not receive any money from their song ‘Gelato’.

“Kudos to someone like Zlatan, who took a bold step, by flushing out a full fake friend like Cuppy, who was just using his head, all in the name of my papa na Otedola.

“Zlatan did a hit collabo with her, ordinary one kobo he no see. She also took Zlatan to Abuja for her fund raising where she made billions of naira and didn’t even remember Zee for one kobo till tomorrow,” he wrote. 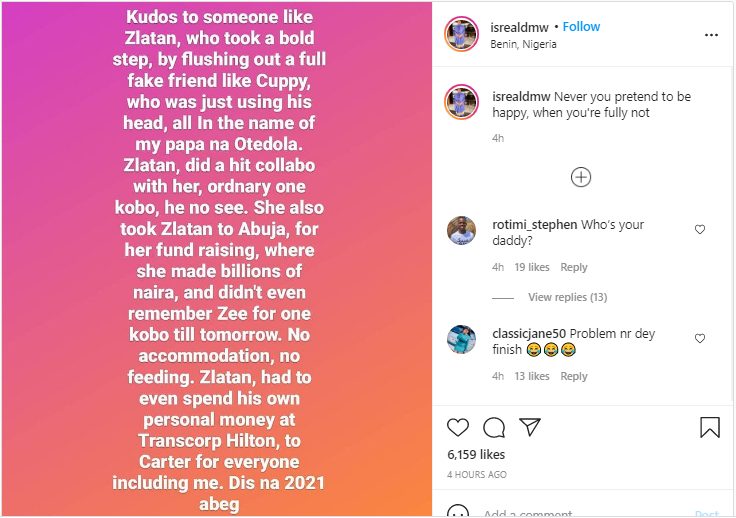 GlamSquadMagazine recalls that DJ Cuppy had called out Zlatan for blocking her for over 10 months on January 8.

“10 months later and I sometimes still wonder why @Zlatan_Ibile blocked me on WhatsApp and Instagram without ever saying why. we were actually friends …AND “Gelato” was a hit!” she wrote.

Mother of twins and Nigerian actress, Funke Akindele shocks many as she joins the #silhouettechallenge