The lovely couples are blessed with four children Princess, Meraiah, Micheal and M.J.

Taking to her social media page, the screen queen shared a lovely photo with the caption; 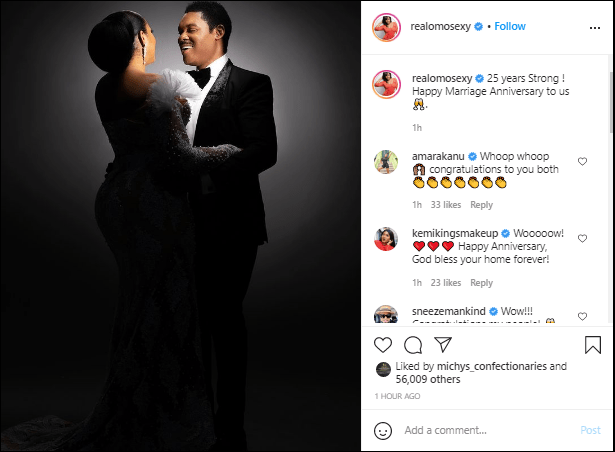 Omotola Jalade was born on 7 February 1978 in Lagos. She grew up in a family of five: her parents (both deceased now) and two younger brothers, Tayo and Bolaji Jalade.

Her husband Matthew is a pilot and ten years her senior. They met when she was just 16, while he was 26, and he proposed two years later.

In 2001, the couple held a white ceremony on board of a plane while flying from Lagos to Benin, with close family and friends present. In 1997, Omotola gave birth to their first daughter.

Since her Nollywood film debut in 1995, Jalade-Ekeinde has appeared in 300 films, selling millions of video copies. She is the first African celebrity to receive over 1 million likes on her Facebook page.

A happy wedding anniversary to the Ekeindes.

Meanwhile, Omotola Jalade-Ekeinde has taken a step further to trademark her name as a brand.

The actress shared the news on her Instagram page as she shared a photo of herself suited up with the caption: ‘“OMOTOLA” is now Trademarked.”

The stunning beauty trademarking the name means that the brand name now exclusively belongs to her and cannot be used by any other person.

Over the years a lot of celebrities are known to trademark their names as they usually build several brands with the platform.

‘How I retrieved gifts from my ex’ - Shade Ladipo

African Wedding: Groomslady steals the show at a wedding