The star said in her tweet that she almost dropped her mic as she couldn’t stop laughing at the hilarious comment the fan made when she was performing on stage about her butt.

“I locked eyes with someone in the crowd while dancing and the next thing this guy said is small yansh dey shake oo. I had to hold myself to not drop the mic and laugh. I didn’t deserve that tbh”. 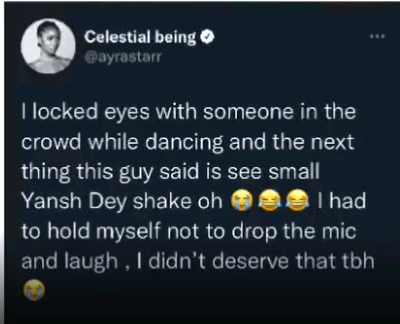 This week must indeed be a week of recount as Nigerian rapper, Mocheddah had also recounted her pregnancy episode earlier this week, saying she was bedridden for 25 weeks.

PHOTOS: Female Pilot Trainee Rescued By Fishermen After Her Plane Crashes In Lake