Music executive, Soso Soberekon aka White Lion, has declared his intentions to go back to school.

The popular talent manager made this known when he took to his Instagram page to drum on the importance of education.

According to Soso, he just lost a life-changing appointment because he doesn’t have the required degree. A fan had asked him during a question-and-answer session if school is important for creatives.

”Education is very important and a major plus, I just missed a lofe changing appointment because I don’t have the required degree. I am going back to school soon, I don’t want to be limited anyway”

Meanwhile, the popular music executive, Soso Soberekon, shocked all his fans and followers on social media after he share a completely unexpected piece of information with them.

Soso Soberekon set to run for Rivers State Governor in 2023, which he made known to his fans and followers on Instagram.

Screenshot of his poster he shared on his IG page on Tuesday September 1 of 2020; 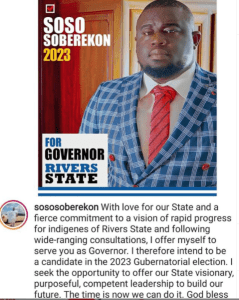 He has however not disclosed the party he would be running on.

This comes after the little boy rocked designers bag and shoes to school.

The excited mother shared a photo of her son in a Fendi shoes and D & G bag as he goes to school for the first time.

Waking him up, dressing him up, taking him to school and picking him up after school is the best part of my life right now. I feel so blessed.

And all the new words he’s learnt in the last few days…dear Lord…lol..”