In recent time, when it comes to Nigerian politics, young people are actually in charge.

Desmond Elliot, an actor, director, and politician from Nigeria, has appeared in over 200 films, as well as a number of TV programmes and soap operas.

Desmond Elliot declared his intention to represent the All Progressive Congress in the Lagos State House of Assembly in September 2004. (APC). To everyone’s surprise, he ran for office in the Surulere Constituency in Nigeria on April 11, 2015, and won. In order to continue serving as the state representative for Surulere Constituency 1, Desmond Elliot is running for a third term.

Olubankole Wellington is a Nigerian-American singer, rapper, actor, businessman, and politician better known by his stage name Banky W and credited in movies as Banky Wellington.

The Modern Democratic Party, which was founded in 2017, gave Wellington the title of politician when he declared his intent to run for the Lagos Eti-Osa Federal Constituency seat in the Nigerian House of Representatives on November 11, 2018.

On February 23rd, 2019, Babajide Obanikoro of the All Progressive Congress won, and Wellington was defeated (APC).

The Gongo Aso singer joined the All Progressive Congress (APC) in 2015 and ran for the party’s nomination in the Ogbomosho Federal Constituency of Oyo State. However, he was defeated in the primaries.

However, 9ice was chosen to serve as Abiola Ajimobi, the former governor of Oyo State special’s adviser on youth issues. 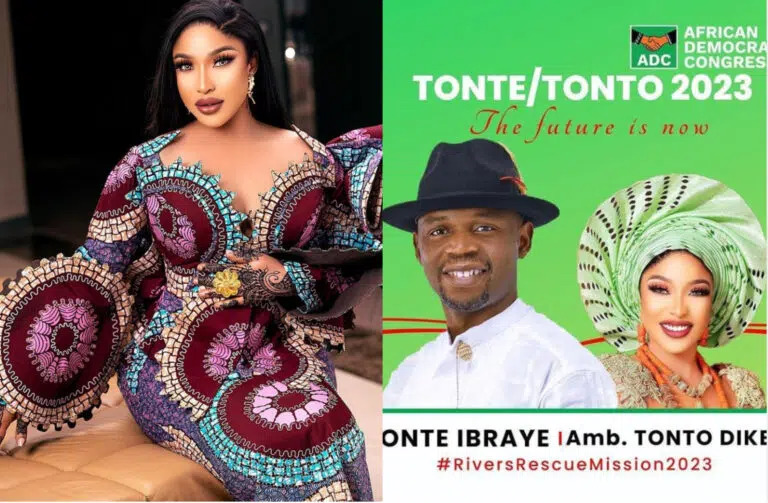 On June 25, 2022, in Rivers State, ahead of the general elections in 2023, the Nollywood actress received her Certificate of Return as Tonte Ibraye’s running mate for the African Democratic Congress ADC.

The controversial actress informed her supporters that she had made the politically audacious decision to accept the position of deputy governor on the ADC platform.

Actress and producer Akindele-Bello Olufunke, also referred to as Funke Akindele or Jenifa, is from Nigeria.

The Nollywood actress was chosen as the Peoples Democratic Party’s (PDP) running mate for governor of Lagos in the 2023 general election.

The official debut of Funke Akindele took place in her hometown of Ikorodu on July 12, 2022. She mentioned in her speech that she would put her acting career on hold to enter politics.

0
Ifeanyichukwu Ngere September 27, 2022
No Comments Yet