Nollywood actress Ruth Eze has announced the death of her father.

“RIP Daddy. Lost my dad this morning,” she wrote. 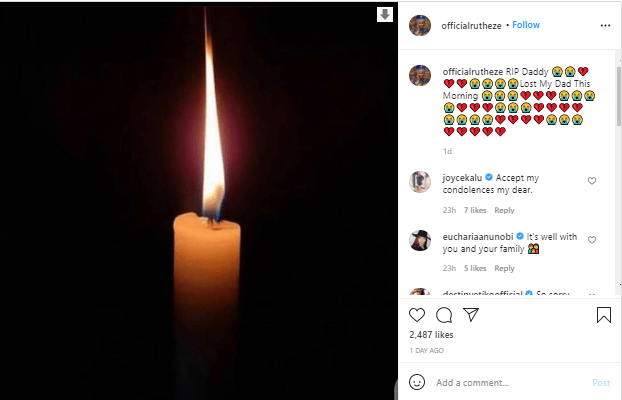 Meanwhile, Kunle Agboola, filmmaker and producer of the popular Yoruba TV show ‘Idan Irawo’, has died at the age of 53.

According to a statement by Lanre Agboola on Saturday, he died on Friday, August 12, 2021 after a brief illness at the intensive care unit of the NYU Langone Brooklyn, New York, United States.

He also had a history of kidney malfunction.

Nollywood actress Mercy Aigbe and others campaigned to raise funds for his treatment some years ago.

Agboola created and produced ‘Idan Irawo’ which aired on Africa Magic. He was also a record producer for Daddy Showkey, Tope Alabi and Sunny Neji.

Before his death, Agboola was the sound engineer and media officer of the Redeemed Christian Church of God, ICB Parish, Brooklyn, New York.

He is survived by aged parents, wife, children and siblings.

Nollywood mourns as Kunle Agboola dies in US hospital