Nigerian celebrities like Zubby Michael, Junior Pope, and others, have taken to social media to drag life out of actress, Annie Idibia over her social media outburst. 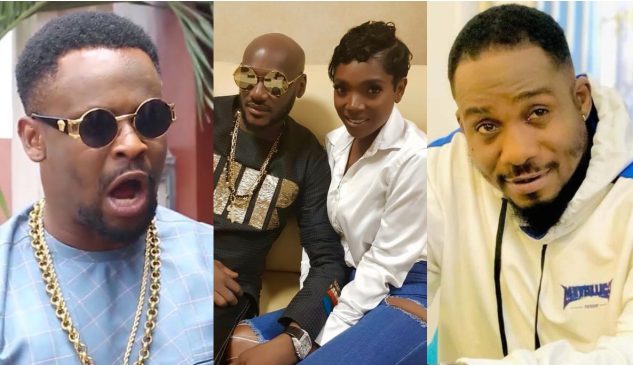 Glam Squad Magazine earlier reported that Annie took to her verified Instagram page to call out 2Face Idibia for spending days with one of his baby mamas, Pero Adeniyi.

“I am a patient woman. I am not a fool innocent. Your family never loved me from the beginning. No matter how hard I tried. I was never worthy to them,” she wrote.

She continued, “I have made so many sacrifices for you and all your children. God knows I have I tried. Your baby mamas constantly use your children as an excuse for all sort of rubbish.”

I try to stay gracious. You are not the first man on the planet to have kids by different women. You can do better. Everything I do is to show the good human that you are.”

Reacting to her outburst, Zubby Michael called her crazy. He wrote, ”Any woman that calls you out online is a wrong woman no matter what because a GOD fearing woman with home training will understand that this space is just like a market square. NDI ala NDI ala”

Jnr Pope on the other hand berated her for bringing the issue to social media. He wrote, ”No Marriage Wahala Brought To Social Media Has Ever Gotten Resolved Amicably..Instead it is the begining of the END….Take your marriage issues to your parents/ marriage counsellors….NEVER ON SOCIAL MEDIA”

An Instagram user, Official Zaron wrote, “For this woman to speak up publicly, make u no say the thing don hook her .”

One Mims MJJ wrote, “2face is one man I love and Annie is another woman I admire, for her to say this, she must have taken a lot, God please heal their home”

NGs Glow wrote, “Nobody should come her and say why she is airing this?
You don’t know how she feels! And you not wearing her shoes…drop your comments here with little sympathy please…she sef na human being!”

One Ifynnama wrote, “Baba dey use children as excuse to shag all those baby mama’s one after another😂Omoh!! Annie dey try ooo, but what do you expect from a man with different baby mama’s ?”

Pero is 2Face’s first baby mom, having given birth to three children for him.

She’s been at odds with Annie for a long time.

Their feud dates back to 2015 and 2016, when they both publicly chastised each other on social media.

When images of 2Face Idibia allegedly kissing Pero Adeniyi at the singer’s nightclub in 2015 went viral, their tense relationship was thrust into the spotlight.

Why I 'left' Nigeria – Charlyboy