Nigerian celebrities and fans of the Big Brother Naija season 6, BBNaija 2021 show, have taken to social media to drag life out of the organizers over the new ‘Pere and Angel twist’. 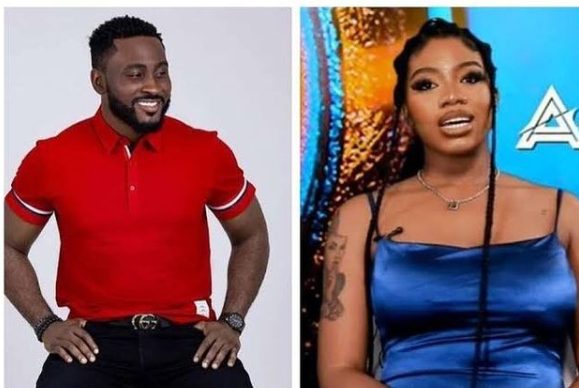 Gam Squad Magazine recalls that last night after the live eviction show, Pere and Angel were sent to the white room, and given an opportunity to be one of the finalists, despite Pere having 25% votes while Angel had just 14%.

Along with Queen, Whitemoney, Saga, and Nini, the housemates were up for eviction. Nini, Queen, and Saga were evicted, but Whitemoney was placed in the top five alongside Cross, Liquorose, and Emmanuel.

Pere and Angel, whose eviction was announced on stage by Ebuka after they received the second and third most votes last week, were offered the opportunity to stay on the program with only one week to go.

They were assigned a task in the white room, and the housemates who completed it were given a chance to reunite with the other roommates and compete for a spot in the top five.

Reacting to the twist, actor, Fredrick Leonard took to his Instagram page to condemn the act.

According to him, there is no difference between this and Nigerian politics. See his post below: 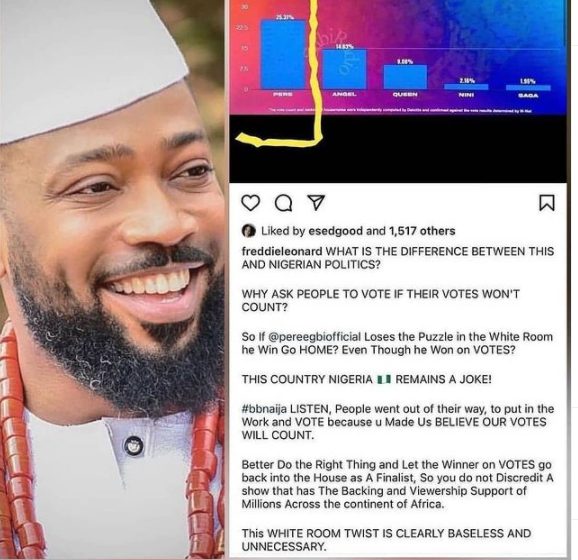 One Marvis Supreme commented, “Nigeria politicians has entered and hijacked this BBN show with their Pattern of politics.”

One Ichie Khali wrote, “Not a fan of pere but this is cheat 😐 this is totally unfair. Pere beat queen with alot of margin. Why this nonsense ”

One Wallington commented, “Are they indirectly saying People that voted for pere to earn the final spot are mumu , this is the biggest daylight robbery ever,we dey complain of nigeria govt and corruption, now see this one now.”

One Corazon commented, “Biggie your twist is foolish..after we voted tirelessly for pere.. see his vote gap against Angel”

Pere’s Instagram handler also took to his Instagram page to react. He wrote, “No matter the outcome of this game.. We own that 5th spot!! Its the will and choice of the voters that sacrificed tirelessly all week. We earned it “. See the post below:

Bobrisky in the mud as Daffy Blanco continues to drag him