Mary Remmy Njoku, a popular Nollywood Actress, producer and media executive, has reacted to allegations by follower that her husband who is the iROKO TV boss, pays graduates staff N30k salary.

Mrs. Njoku has challenged any member of staff who earns that amount in a company she runs with her husband to speak up.

The allegations came in after Jason Njoku said 4.6 million Naira school fees is cheap and he pays more for his 3-year-old daughter.

His followers then reacted called him out saying for someone who pays graduate staff N30k to N40k how does he expect such staff to pay school fees of N4.6 million for their kids.

His wife, Mary Remmy Njoku however defended him, saying that people who offer N10, 000 services should not expect to be paid more than that just because they are graduates.

Mary, who is the Director General of ROK Film Studios, has now responded.

She then challenged any ROK staff who presently receives N30k or N90k to speak up, adding that she will in turn give the person 1 million Naira and a public apology.

” I want to apologize for speaking about meritocracy.
For speaking up for smart people who work hard but underpaid cos they couldn’t afford to further their education.
I apologize.
I run ROK. And we value our employees irrespective of their educational qualification.
So come forward with proof if you know any current ROK staff who earns 30k 70k or even 90k. Graduate or illiterate.
And get 1m naira.” 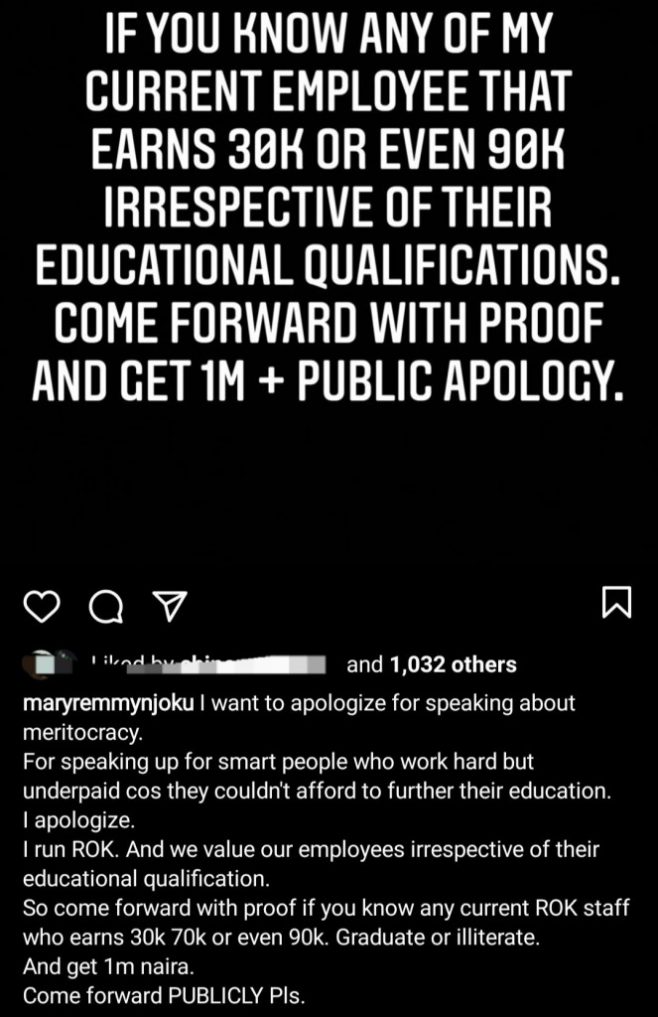 0
Ifeanyichukwu Ngere March 4, 2021
No Comments Yet