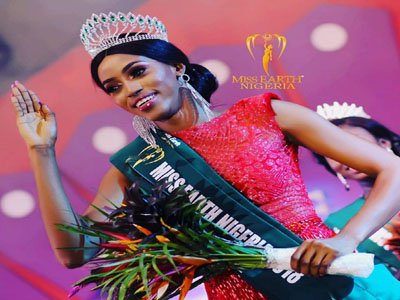 The event which held at the Presidential Hotel, Port Harcourt, Rivers State was well-attended with Harrisong leading performers that thrilled audience.

The Theme for this year’s pageant which was anchored by 2006 Miss Earth Nigeria pageant winner, was ‘Goddesses of the Earth’.

Maristella, who hails from Anambra State, will represent Nigeria, against over 90 other countries at the Miss Earth World which is scheduled to hold on November 3, 2018 in the Philippines.

As a build-up to the event, all the contestants camped for 10 days at Reventon Park Hotel (Lamborghini) hotel, Port Harcourt. Rivers State Culture was also on display as ‘Owembe boys’ masquerades from Obio/Akpor LGA thrilled the audience.

Speaking about the event, Ibinabor Fiberesima, national director of Miss Earth Nigeria pageant, praised the state governor, Nyesom Wike, for providing an enabling environment for businesses to thrive in the state.

“Miss Earth Nigeria pageant is all about the environment; and Rivers state has indeed regained her former glory as the garden city all thanks to the governor,” she said.

Over 1000 ladies from across the ladies took part in the qualifiers.

0
Sebastiane Ebatamehi September 12, 2018
No Comments Yet