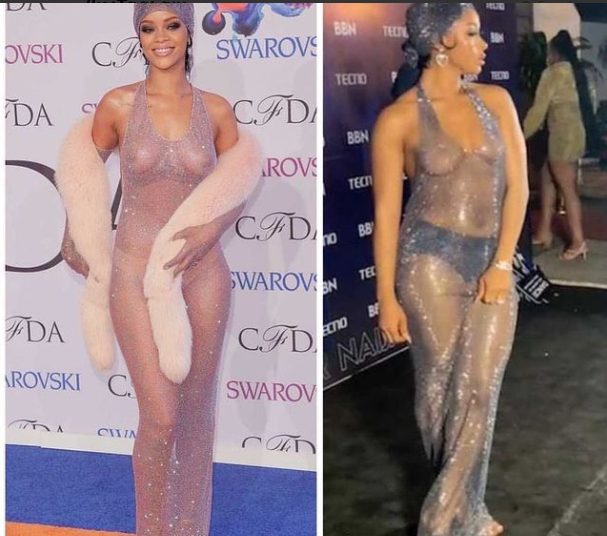 Nigerians have taken to social media to react after Big Brother Naija housemate, Liquorose, rocked a silver see-through outfit to an event in Lagos Nigeria.

Glamsquad Magazine notes that popular American singer, Rihanna once rocked a similar attire to an event.

Read Also: Liquorose Opens up on Why She Can Never Be Friends With Angel 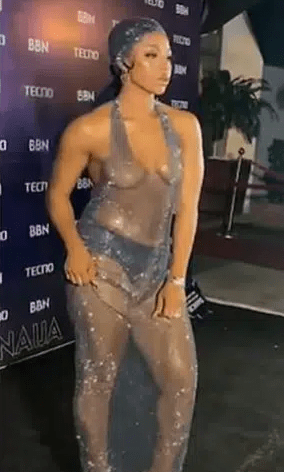 Liquorose rocked hers to the TeknoXBBN Lagos Fashion show on Thursday night.

Liquorose was styled in a see-through outfit in the video that went viral, prompting various reactions from admirers who compared her to colleague Angel.
Angel has undoubtedly gotten ongoing backlash from netizens over her attire because she constantly exposes her body during the Big Brother Naija Show, and has previously stated that she does not value her body.

Liquorose, on the other hand, rarely wears revealing outfits, and many admirers were taken aback when they saw her dressed in such a way at the current event.

Many netizens reacted angrily to this, claiming that if Angel had worn such an outfit, she would have been hounded cruelly online.

thick_nd_bold bwrote: If is angel u guys will start dragging her now this same person is now a queen

zitabenita wrote: This is trash. Just remove the pant and I’ll be okay

Gigi Hadid and Zayn Malik break up over 'violence' (details)