Veteran actress, Joke Silva took to her social media page to appreciate her husband, actor, Olu Jacobs. describing him as her best decision.

The veteran actress and educator shared a photo she took with Olu to Instagram on April, 17, been Husband Appreciation Day.

In the caption, she said that saying yes to him is “the best YES I ever said.” 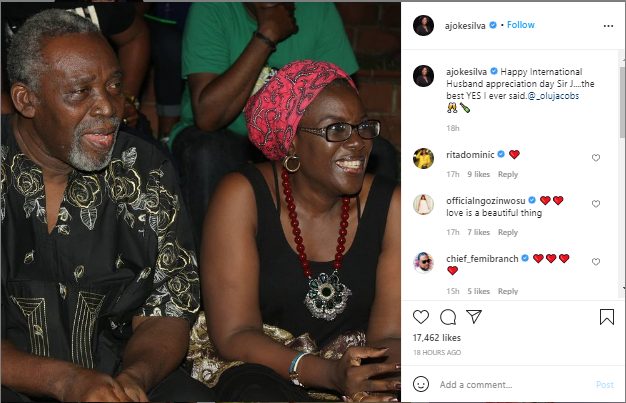 Meanwhile, Joke Silva, who is the daughter of the late Dr Abimbola Silva, the first Nigerian female medical doctor, has spoken about how she received the news after she accidentally found out that she was adopted.

The Nollywood veteran made this known during a chat with broadcaster, Funmi Iyanda at her show ‘Public Eye.’

”It something like where one is just getting to share it in the public. It is something that I found out when I was much younger. Mine was a secret adoption,” she said.

“When I mean secret it was legal but it was not something that my parents discussed. My mum’s elder sister wanted me to travel with her to Kenya and my mother was not around. She asked If I knew where my passport was and I was like yes yes yes, I know where mum keeps all the important documents.”

“Then I go to the important suitcase that has all the important documents, where I found my passport but also found my adoption certificate. It was like ‘I beg your pardon.”

When asked at what age she found out, Silva said she was about 10 or 11. According to her, it was shattering to find out at that age.

Rapper Ruggedman speaks on marriage, says no pressure to get married