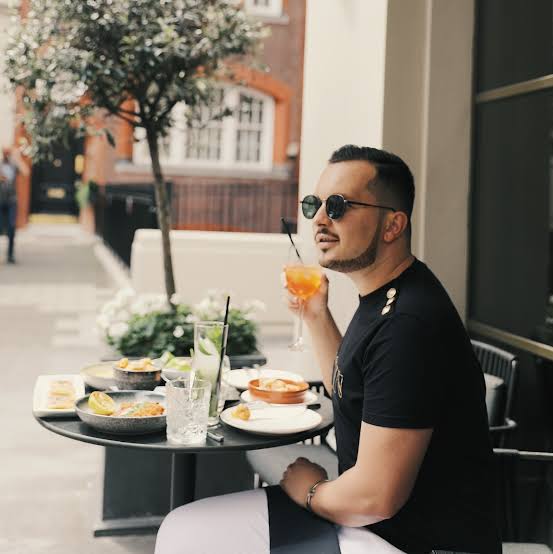 Glamsquad reports that Cosmin Cernica, 29, a London-based Instagram influencer, claims he spends £10,000 per month on food because he dislikes preparing food or the smell of cooking in his home.

Cernica is a self-proclaimed gourmet foodie from Romania who enjoys caviar, truffles, and champagne.

READ ALSO: “If anything happens to me, hold him” – Actress, Cossy Orjiakor calls out tenant who threatened to beat her up

He spends the majority of his time in either London or Dubai.

Cernica claims that he spends up to £10,000 per month to satisfy his tastes, so he orders in and eats out rather than cooking.

He enjoys the luxury dining establishments in Mayfair, Chelsea, and Knightsbridge, and eats burgers with real 24karat gold leaf on top from an exclusive Chelsea restaurant.

He adores ‘anything with truffles on it,’ spends tens of thousands of pounds on chocolate, and lives with his husband Robert.

‘I don’t like cooking, and I don’t like the smell of food cooking in my house,’ Cosmin explained.

‘So the only options left are to order in or go out, which I do five to six times a week in London and every day in Dubai.’

‘For me, going out to restaurants is more about the experience than the food – I am very particular about where I go.’

‘I love a truffle breakfast, and if it’s the weekend, it’s always paired with champagne.’ I also enjoy salmon sandwiches topped with caviar for breakfast.

‘Even if I order frequently, I try to eat reasonably healthy, so I would never order something from, say, McDonald’s.’

‘However, when I want a “fast food treat,” I order a Wagyu burger with Oscietra Caviar and 24K Gold leaf from my favorite Chelsea chef, Mr. Z, who always delivers his food in a Mercedes.’

‘They are very expensive, especially the white truffle or if they are not in season in Italy and need to be flown in from afar,’ said Cosmin, who spends thousands of pounds on chocolate.

‘Every time there was a fresh truffle delivery, my local shop in Chelsea would call me. I also eat caviar, which can be quite expensive, and I enjoy sea food, particularly fresh lobsters and red prawns.’

He claims he has to look good as well, so he spends more than £5,000 per month on health products.

‘I do spend a lot on cosmetic products as well, I am obsessed with anything skincare or niche fragrances,’ he admitted.

‘I try to eat organic, as much sea food and vegetables as possible, but I also enjoy champagne and sweet treats.’

‘I do buy a lot of chocolate; Harrods’ chocolate hall is my guilty pleasure; I once spent £2,000 there in one sitting.’

In response to critics who believe he spends too much money on food each month, he says:

‘I don’t think it’s excessive; it’s just a number, and I believe that food should always be of the highest quality.’ It is, after all, a necessity, and I would rather spend more on super high quality food than anything else.’