Popular Nigerian celebrity actress, Tonto Dikeh, has taken to social media to cry out and admit that she’s in pain.

Tonto Dikeh mentioned this while posting a photo of herself on Instagram, claiming that no matter what happens in the world, she must retain her skin so that someone’s son can discover her.

One of her fans who commented on the post stated he wanted he could help her erase the sufferings since she doesn’t deserve it, to which the actress responded that it could have been lovely, but pains make one stronger. 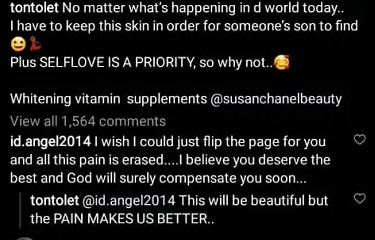 Tonto Charity Dikeh is a musician, songwriter, and humanitarian from Nigeria. Tonto Dikeh established her organization, the Tonto Dikeh Foundation, on August 27, 2000.
Tonto Dikeh is the third of five children born into a household of seven.

Her family is of Ikwerre heritage and hails from Obio-Akpor, an LGA in Rivers State. She lost her mother when she was three years old and was raised by her stepmother, who has two children. Dikeh went to Rivers State University of Science and Technology to study petrochemical engineering.

In August 2015, she married Oladunni Churchill in a traditional ceremony. She was rumored to be having a sexual connection with Rukky Sanda in 2014.

The rumor was debunked during an interview with Rukky Sanda. Dikeh gave birth to her son, whom she named Baby X, in February 2016. However, the couple has gone their separate ways since then.