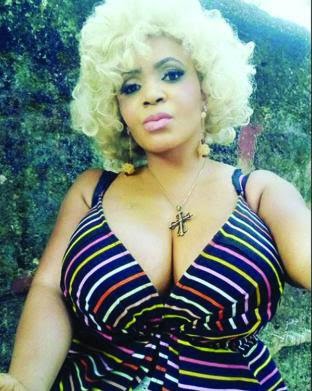 The actress claim that a reporter wrote that she slept with dogs about two decades ago, which made her travel.

The actress claim that no action was taken by the police, when she complained about the viral story. She said that similar occurrence occurred and police are already on the tail of the perpetrator.

On the viral claim of sleeping with dogs, hear the actress full gist below;

“The pictures that went viral were actually taken on the set of a movie she was acting in at the time. It was a make-believe thing. Besides, there were a lot of people around (on the set), including the director and his wife. I don’t know if he (the journalist) was just trying to promote the movie, because actually, I knew him in person.

“He was dating a friend of mine and she even tried to intervene. He just put the story on the cover of the newspaper. It was so bad that even churches used me to preach. I was looked down on. Everybody was scared that period because they thought I had HIV/AIDS. The journalist actually included it in his report that I had contracted the disease. I had to run away for my safety. But, even when I ran away, they contacted my father and told him that I acted in a pornographic movie. It was so bad.”

The actress also revealed her reaction when the story circulated online. In her words,

“I only went to the police station to report the matter because I knew it was a criminal offence. Back then, I was not the kind of person that could afford a lawyer because I was poor. I think I was 21 years old at the time. I was very young and there was nothing that I could do, except report the case to the police station. But, the police did not come out to say anything. It seemed like nobody cared. They were just happy that somebody was been dragged in the mud. However, a girl claimed that she slept with a dog on social media, and the police rushed into action and arrested her. I don’t even know if I can still get justice.”

He Won Out Of Favoritism – Daniel Regha Reacts To Sabinus’ AMVCA Award Win, Says No One Deserves It Than Mr Macaroni