Media personality, Toke Makinwa foundly known as Tokes has revealed that she doesn’t care about being in anyone’s life.

Toke who celebrated her 38th birthday few days ago took to be Instagram story to bear her mind. According to her, she doesn’t to be in people’s lives anymore.

The podcast host further stated that she knows her worth and doesn’t have time for “wishy-washy behaviours, bad vibes, mixed signals or fake love.

Still focused on the people, Toke noted that it takes nothing to stop speaking about certain people as she only wants to be sorrounded with real love, money and motivation.

“NO SHADE, BUT I DON’T CARE TO BE IN PEOPLE LIVES ANYMORE. I KNOW MY SELF WORTH AND THAT I AM A GENUINE PERSON. I NO LONGER HAVE TIME FOR WISHY-WASHY BEHAVIOR, MIXED SIGNALS, BAD VIBES OR FAKE LOVE ANYMORE. IT TAKES NOTHING FOR ME TO NEVER SPEAK TO CERTAIN PEOPLE AGAIN. I ONLY WANT TO BE AROUND REAL LOVE, MONEY AND MOTIVATION”. 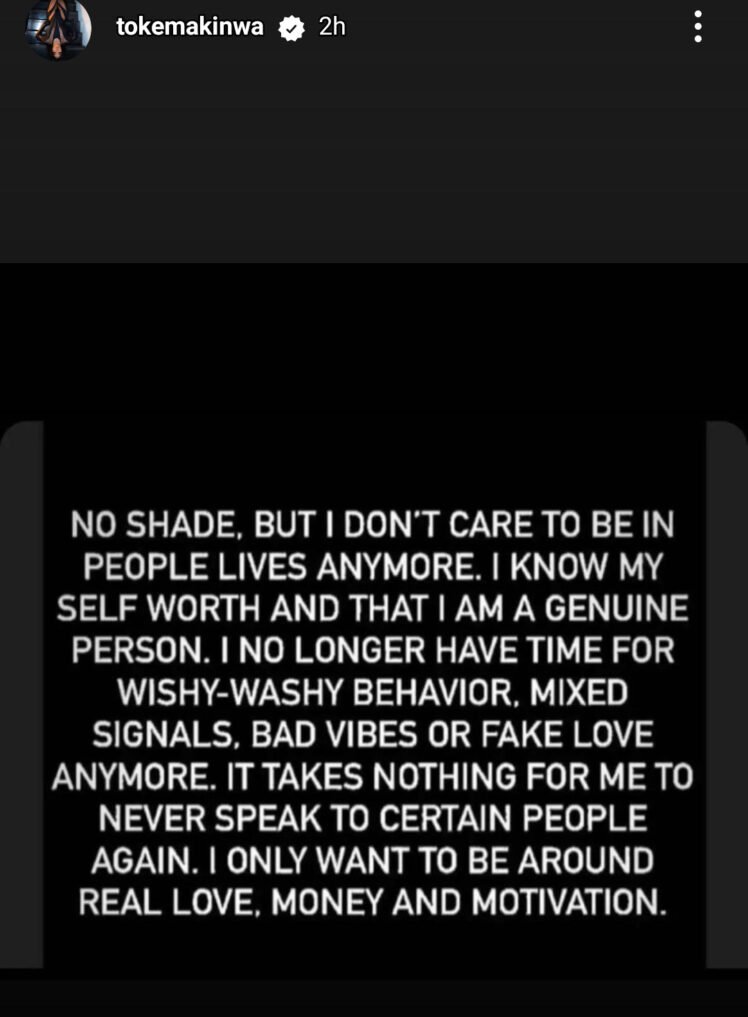 Video: Wizkid opens up on relationship with Burna and Tems

Domestic Violence: Toke Makinwa admonishes her gender to do better

Glam Look Of The Day: Toke Makinwa slay in Loewe