The Kpokpogri’s drama continues to buzz on social media platforms following the leaked audio confession and sex tape that hit the internet over the weekend.

Netizens have continued to drag Prince Kpokpogri, who is a Delta politician and former lover of Nollywood actress Tonto Dikeh, for obvious reasons. It would be recalled that Kpokpogri had earlier denied meeting IG dancer JaneMena, a claim he later retracted when photos of the duo surfaced on social media platforms.

He went on to deny ever having anything intimate to do with the dancer, where he apologised to Janemena, her husband and family for dragging the dancer into his fight with his ex-lover Tonto.

However, when the audio, and videotape of his involvement with Jane hit the net, Kpokpogri, deleted his initial apology and has remained silent.

Amid the trending saga about Prince Kpokpogri and Janemena, an Instagram user identified as trapselena has revealed how he(Kpokpogri) and his clique operates.

The IG user remarked in an Instastory session that Janemena’s situation comes nowhere close to the grade of ladies Kpokpogri and his circle have sex recordings of; women of great renown.

She went on to say that Kpokpogri and his gang seek women for relationships, and when it appears that they have succeeded, they secretly videotape them during intimacy without their knowledge.

She revealed that the plan is to utilize it in the future to blackmail the ladies. 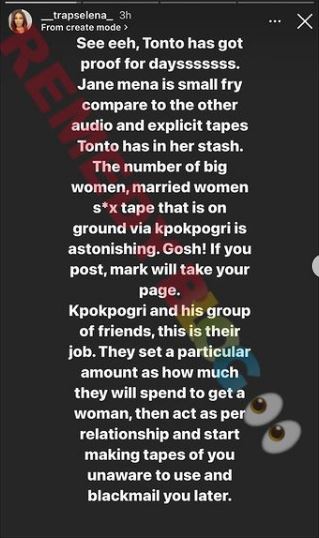