Entertainment, People
May 21, 2021
by Ifeanyichukwu Ngere
0

Tito Idakula, the wife of singer Bez Idakula, has narrated how she had to let a worker go over fear of spiritual attack.

Titi, who stated this during a question and answer session with her followers on Instagram, said her husband had a ‘mad’ dream after the lady came to work for them.

According to the mother of three, she refused to let the worker go but changed her mind after she had a dream similar to her husband’s.

Responding to a follower who claimed that her nanny was attacking her family spiritually, Tito said;

“One chick came to work with us. My husband had one mad dream and told me to let her go. I said no now, seems okay. The next day, my dream was just like his. I paid her and said “bye” And these are the things agencies cant help with. It’s prayer that is the best.” 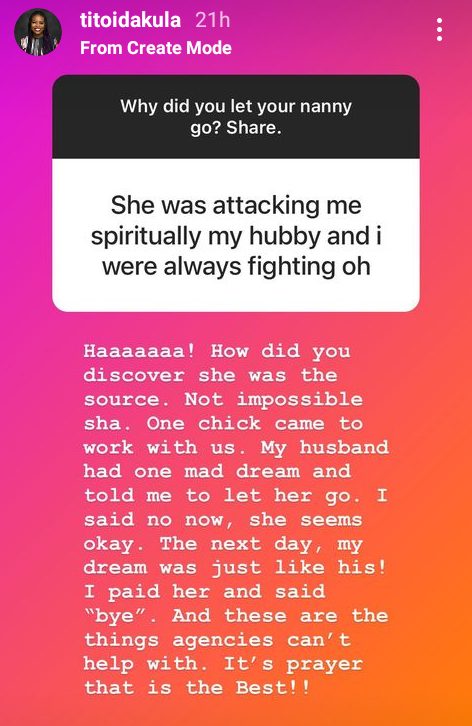 Meanwhile, Tito Idakula, has shared her encounter with a cabman who the holy spirit made her say a simple prayer for.

According to Tito, she met the cabman after booking a ride to meet a friend who had received bad news. She further revealed that she kept receiving a message from the holy spirit about the man’s daughter being ill and him working so hard because of her.

Tito said after she delivered the holy spirit’s message of telling him that “everything will be fine”, he started crying, was speechless and bowed his head after dropping her off. She also disclosed that the man called 3 times and also sent her a message to say thank you.

She tweeted; Just spoke to the Bolt Driver who gave me a ride last night. He called to say thank you. Let me tell you what happened and why regardless of what the world says, listen to the voice of God and simply obey when the Holy Spirit tells you to do something

A friend of mine got some bad news so I booked a ride as it was late. I was just praying for her and I honestly wasn’t thinking about the person driving me. But as I prayed, I got in my spirit “tell him that his sick daughter will be healed and everything will be okay”

I was like “Lord, you’ve sent me on another message, I just want to focus on that” but the Holy Spirit kept speaking about this guy. He was saying how his daughter was ill and how this man was working so hard because of her and he needed him to know everything will be fine.

This man literally burst into tears saying “thank you Jesus” over and over again. I proceeded to give him the rest of the message and he was just speechless. Even after he dropped me, he just parked his car with his head bowed. I didn’t ask a lot of questions but I knew!

I knew he needed that word at that exact moment and it was a privilege to be the one to let him know that God had him on his heart. I also really needed that experience because I got to share it with my hurting friend as a reminder of God’s love and faithfulness.

In this world, there are many loud voices but it’s so important to listen out for the only one that matters. Through the noise, the pain, the struggle and frustrations, God is always speaking but are we always listening? Don’t be distracted the noise, what is God saying to you?