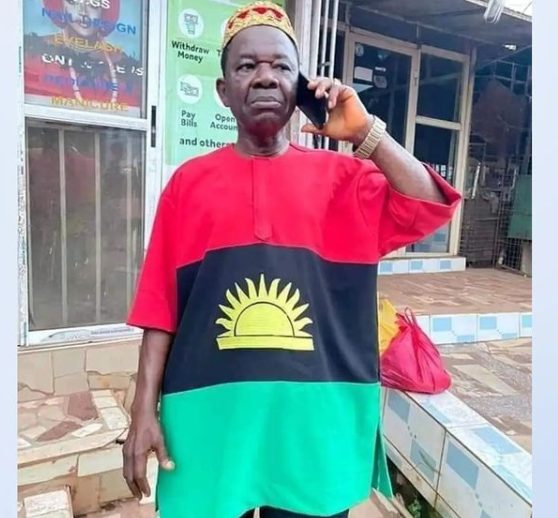 The actor was seen getting out of his vehicle, which carried the inscription “Chinwetalu Films,” at one point in the video.

The automobile was then checked by security personnel before he was manhandled by troops who fired warning rounds to disperse the gathering.

According to reports, the event occurred today, October 7, in Upper Iweka, Onitsha, Anambra state. Watch the clips below:

Reacting to the video, Nigerian celebrities and fans of the actor took to social media platforms to air their opinions.

Daddy Freeze wrote, “If he wasn’t causing any trouble, then wearing this alone is NOT a crime.”

Odogwu King wrote, “I will not be surprised if someone is supporting the fact that this man is being humiliated for wearing just this”

Igwe Monty wrote, “When this man was fighting Nigeria civil war, they never born all those gun soldiers..Na Chinwetalu Agu be bokoharam and bandits they’re supposed to be fighting”

Dotun wrote, “It will surely be a faceoff with the military cuz that flag is not recognize yet ..we should be careful how we create more problems on our self”

0
Richards Michael October 7, 2021
No Comments Yet

VIDEO: Actor Chiwetalu Agu Survives Series Of Spiritual Attacks, Reveals What Came Out Of His Body

Wait a minute….Do you know Chiwetalu Agu is releasing a Music Album?