Pretty Mike’s attitude follows rumors of a crisis in dancer Korra Obidi‘s marriage to an American man, Justin Dean, who has voiced a wish to divorce her amid claims of infidelity and a lack of accountability in their marriage on her part.

Pretty Mike warned supporters to disregard any social media marriages, including a screenshot of a tweet from a woman expressing amazement about Korra Obidi’s claimed failed marriage, in which she decried how terrible social media addiction is.

Reacting to this on Instagram one henzygraphics wrote; ‘When people leave their parents that have been together for decades but decide to pick youngsters that can barely live together for 5 years as role model for a happy life. All because of social media validation. SMH’

officialbobbyfrederick; ‘Social media doesn’t spoil a relationship, a partner with skeletons in their cupboard ruins a relationship ’ 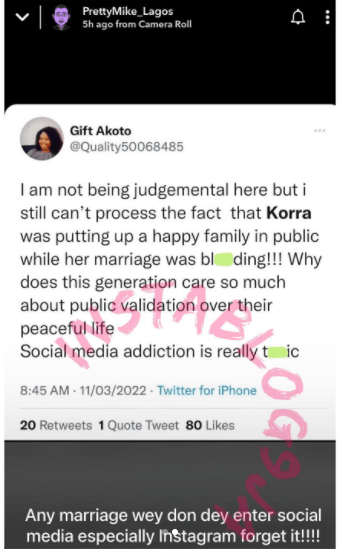 Davido Hints On Building A Huge Property For His Kids