Glamsquad Magazine recalls that on a radio station, Tiwa Savage claimed that a blackmailer was attempting to extort money from her because he had her and her boyfriend’s s*x tape on his phone.

Here are facts about the trending s*x tape;

The person on the 10 seconds video is indeed Tiwa Savage. Tiwa Savage and her fling (maybe side piece) had the s*x on a yacht during her trip to Ghana. Before the s*x tape, Tiwa Savage, was seen cruising and enjoying with her friends on a yacht. 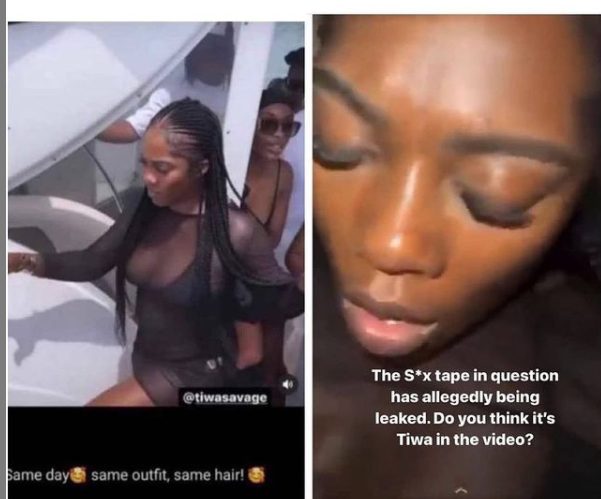 Tiwa Savage appeared stoned (drugged)/drunk in the video. For a celebrity of her status, she obviously wouldn’t allow a man to record her during s*x. She was high AF and probably just “flowing with the moment”.

The act was carried out the period when her alleged ex-boyfriend, Obama DMW died

Recall that Tiwa traveled to Ghana the period when her alleged former lover, Obama DMW died. She was literally mourning him while she had s*x with another man and recorded it?

Being very careful is a big deal for someone as huge as Tiwa Savage. The recording and uploading by “mistake” of the s*x tape was all planned by her management to promote her latest album, “Water and Garri”.

Who records themselves during s*x via Snapchat? Was he trying to enhance the beauty of their private parts using filter? LOL.

PS: We couldn’t share the tape here because we do NOT share p*rn on this site. You can search for the video on the internet as it’s littered everywhere.

Days after s*x tape saga, fan honors Tiwa Savage with a tattoo of her face